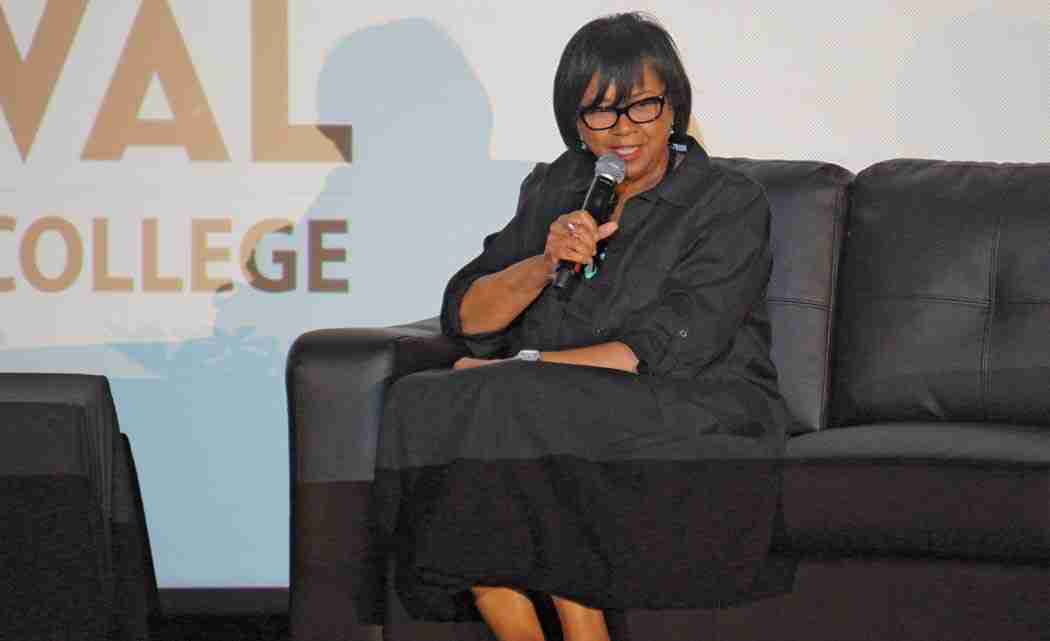 Her journey to become the president of the Academy of Motion Picture Arts and Sciences was guided by the same kind of wisdom that she shared with an audience of film enthusiasts Tuesday night at the O Theater in Miami Beach. Cheryl Boone Isaacs’ appearance was a part of the Master Class Seminar Series from Miami Dade College’s Miami International Film Festival (MIFF), which ended on March 15.

Her trek to become the first African American and the third woman to take the helm of the organization that is responsible for showcasing the annual Academy Awards show has the makings for a fascinating movie script. Young black college coed decides to study political science in the 60s, graduates, then travels the world as a flight attendant. When she goes to California for her sister’s wedding, she finds the presence of hippies and the absence of mosquitos and humidity fascinating.

Unsure of what she wants to do next, the young beauty “just bounced around,” eventually following her older brother, who worked in the film industry, and her passion for movies, to Hollywood. She lands a job working in publicity for a film called ‘Close Encounters of the Third Kind.’ That movie, directed by a young filmmaker named Steven Spielberg, goes on to become a blockbuster that earns more than $337,700,000 worldwide. The rest, as they say, is history.

Boone Isaacs encouraged the students in the audience to embrace bouncing around and to “Live your passion, because nothing will ever, ever fill you up with personal happiness more than that,” she said. And if everything doesn’t fall into place immediately, to keep making U-turns until it does.

She speaks from experience. At every opportunity, she soaked up knowledge like a sponge; knowledge that has informed her career and now her role as the leader of an organization comprised of mostly older white men that has been criticized over the years for its lack of diversity in its award nominees and winners.

“I kept my mouth shut and did anything I was asked to do,” she explained about her early years in Hollywood.

Remaining silent and following directions has served her well. While working at a small independent film company, she said her boss pointed to a wall in the office that was full of file cabinets. He told her to “read every single thing in the file cabinets, and when you’re finished, we’ll talk.”

Boone Isaacs said that the she did as she was told and it was, “one of the best lessons ever. It never occurred to me to question him. When I finished, I knew every project they had. I knew the names of every filmmaker they were working with.”

Her ascension in the industry continued. “After that, I was invited to sit at the back of the room during meetings.  Absolutely great experience,” she said.

She went on to become Paramount’s executive vice president of worldwide publicity, where she orchestrated the marketing campaigns for Best Picture winners ‘Forrest Gump’ and ‘Braveheart.’ Her impressive resume also includes president of theatrical marketing for New Line Cinema and owning her

own company, where she has consulted on several films, including Best Picture winners ‘The King’s Speech’ and ‘The Artist.’

A colleague invited her to become a member of the Academy 27 years ago. The same colleague was instrumental in Boone Isaacs becoming a governor, a role that she held for 21 years, representing the public relations branch. Along with 51 other governors, the board manages and oversees the Academy, which came under intense criticism for its all white slate of 2015 nominees, resulting in the hashtag #OscarsSoWhite on Twitter.

The most conspicuous snubs included David Oyelowo, who portrayed Dr. Martin Luther King Jr. in ‘Selma,’ and the movie’s director, Ava DuVernay, who would have been the

Since becoming president in 2013, Boone Isaacs has taken action to diversify the organization that determines which movies get nominated. Because membership is for life, diversifying the body has to involve addition, not subtraction. To that end, she removed a cap on the number of members and had the Academy invite more than 400 people to apply — many of them younger and people of color.

Tuesday night’s audience appeared captivated by Boone Isaacs, whose response to an audience member’s question about making progress in the industry was, in part, “You don’t try, you do.” She certainly seems to be following her own advice.