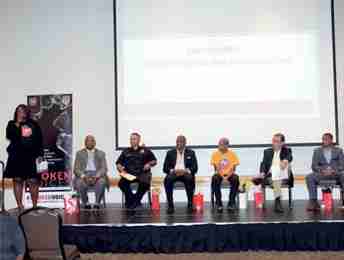 Dr. Yolanda Green-Samuel, a tenured Miami-Dade County Public Schools (MDCPS) educator, has decided to turn lemons into lemonade. As a result of the 2014 hit-and-run death of her brother, Eugene Green, she created “Just An Accident Stop” (JAAS), a non-profit 501 (c) (3) community outreach organization aimed at bringing awareness, education and advocacy to those impacted by hit-and-run accidents. She serves as president and participant.

The event featured a panel discussion between prominent community members, residents and other attendees.

Dr. Gil Lopez, a recently retired licensed school psychologist for M-DCPS and crisis interventionist, said the process of grieving is multifaceted. “There are several stages a person goes through when grieving the loss of a loved one … the most critical is denial,” he said.

Green-Samuel admits the initial shock of the death of her brother was numbing but through “family and spiritual support, she began to “feel again.”

Officer Hamlet Diaz of the Miami Gardens Police Department said there are moral and legal obligations to consider when involved in a hit-and-run accident.

“People usually leave the scene of an accident because they fear they will go to jail for not having proper registration, a suspended license or warrants. Remaining or fleeing the scene is simply a matter of a citation or felony,” Diaz said.

Also present was Dr. Steve Gallon, who on Nov. 18, was elected to represent MDCPS District 1 as its school board member. “The sense of value and moral responsibility is something that too many young people seem to have lost,” he said. When asked about what the school board could do to better educate youth on driver’s safety, Gallon advocated for full reinstatement of driver’s education classes.

In 2015, Florida’s Highway Patrol statistical data revealed there were 186 reported fatal hit-and-run accidents. Of the 92,000 car crashes, drivers between the ages of 18 to 27 years old were most cited for leaving the scene of an accident.

“Driver’s education programs have been dramatically reduced or eliminated,” Gallon said. “When we talk about cutting programs that have broader implications beyond reading, math and science, the need for specific conversations to be had is vital. We spend a lot of time promoting awareness of so many other things; this is one that the school board should be made aware of.”

Gallon said he’s concerned about reckless driving and the spate of accidents in urban pockets of Miami.

Miami Gardens Mayor Oliver Gilbert said there is currently a plan of action underway to reduce the amount of accidents and subsequent fatalities.

“One of the things that is going to affect hit-and-run accidents is something that we’re already working on in Miami Gardens that is part of the general obligation bond and that is we’re putting up crime suppression cameras and license plates readers. To that end, in the next couple of years it’s going to become significantly more difficult to be involved in a hit-and- run in Miami Gardens and get away with it. We’ll see a lot more people arrested because of it. That will affect how people behave,” Gilbert said.

According to Gilbert, suppression cameras and license plate readers will be able to track drivers on major intersections as cars move throughout the city and infractions will automatically be registered into a database linked to surrounding municipalities.

Gilbert is a proponent of this Big Brother initiative. He warns would-be hit- and-runners, “You are going to get caught, eventually.”

Green-Samuel said she hopes her brother’s assailant is caught, eventually.