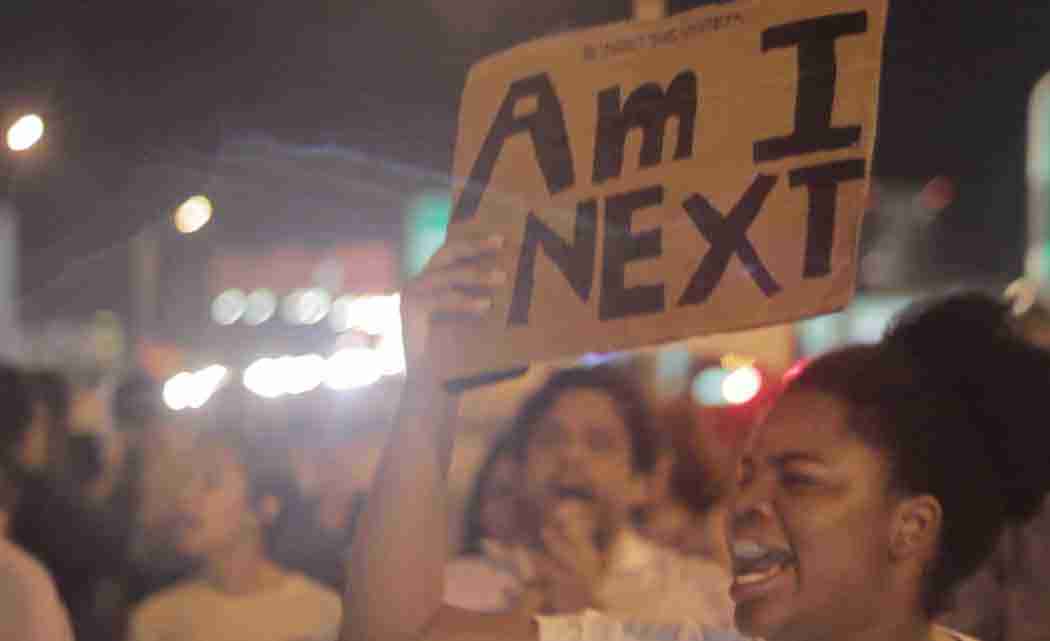 Throngs of jetsetters from around the globe descended upon Miami last week for the annual Art Basel contemporary art festival. Activists and local artists held a vigil during the festival intended to draw attention to the controversial non-indictment in the police-related death of Eric Garner in New York City as well as on the deaths of unarmed teenagers Israel Hernandez and Mike Brown in Miami in 2013 and Ferguson, Missouri in 2014, respectively.  The vigil, organized by the family of Hernandez and the Miami Committee on State Violence, was organized to demand justice for Hernandez, Brown, and Garner.  Hundreds of people participated in the activity which culminated in the shut down of the 195 expressway connecting Wynwood and Miami Beach.

Organizers explained that the blocking of traffic on a busy Friday early evening was strategic.  “We wanted to stage a nonviolent impactful protest to reach a lot of people,” explained Whitney Maxey, of the Miami Committee on State Violence.  The purpose of the expressway shutdown was to engage motorists and dialogue with them, said Maxey.

A Miami Committee colleague of Maxey’s, Tiffany Benford, said that there were “mixed responses” from motorists but many were taking selfies with activists as “most were positive and supportive.” The warmer reception came from drivers who showed their support by raising their hands up in solidarity with the plight of people like Michael Brown who was, according to some eyewitness accounts, shot dead by police in Ferguson, Missouri after raising his hands to surrender.

In a satirical nod to the attention of the international arts scene being in Miami, Benford referred to the shutdown as a unique work. “The whole point of art is to be seen.”

The vigil and expressway shutdown in Wynwood was part of a continuing effort to unite blacks and Latinos in Miami’s resident artists’ community demand accountability from local law enforcement.

“We’re trying to bring awareness to the overall lack of accountability” at different levels of governance, said Benford.  She said that the Miami Committee chose Art Basel weekend for its latest protest activity as a tribute to the memory of Hernandez, a local visual artist, who was tasered to death by Miami Beach police during the summer of 2013 as well as to maximize the potential for international exposure.   “This is not just a local struggle.”

While the struggle is not, for organizers, local, the location of the vigil was also symbolic.  Art Basel moving into Wynwood is, according to Benford, “a very interesting contradiction.”  Like many other “historically black and Latino communities” in Miami like Allapattah, Little Haiti, said Benford, Wynwood continues to see more and more longtime residents displaced via the avaricious encroachment of developer-fueled gentrification.  “We want to link national struggle to local sentiment,” said Maxey.  Also, Hernandez was a graffiti or “tag” artist and, historically, graffiti is associated with hip hop culture and poverty.  “We wanted to make that economic link during one of the biggest money making weekends in Miami,” said Benford.

When activists like Benford and Maxey speak of Art Basel as a huge money maker, they are not exaggerating.   In a December 2013 article published in Miami Today, Michael Spring, director of Miami-Dade County’s Department of Cultural Affairs, estimated that “more than $2 billion of economic activity attributable to the arts and cultural events” rang the proverbial cash registers at Art Basel.

Those figures add fuel to the drive of activists.   “Our pain and struggle is at the heart of creating the United States’ economic system,” said Maxey.  She drew a direct connection between economics and aggression saying that violence has been used throughout U.S. history to maintain a social order that keeps people of color marginalized.   Maxey described the intersection of money and death as an “intergenerational and multiethnic issue.”

All told, organizers estimate that “over 600 people showed up.”  Maxey was pleased though not surprised.   “We were able to catalyze energy that was already there.  People are really itching to be a part of transformative processes.”

At the same time that the vigil was held, the Miami Committee on State Violence published a document entitled “Vision for a Strong Community” which concludes with a four point “program of action” that endeavors to end state violence.  The pillars of the Committee’s vision are community driven public safety; restorative justice; support for trauma healing and family strengthening; and treatment of immigrant families and communities with respect.