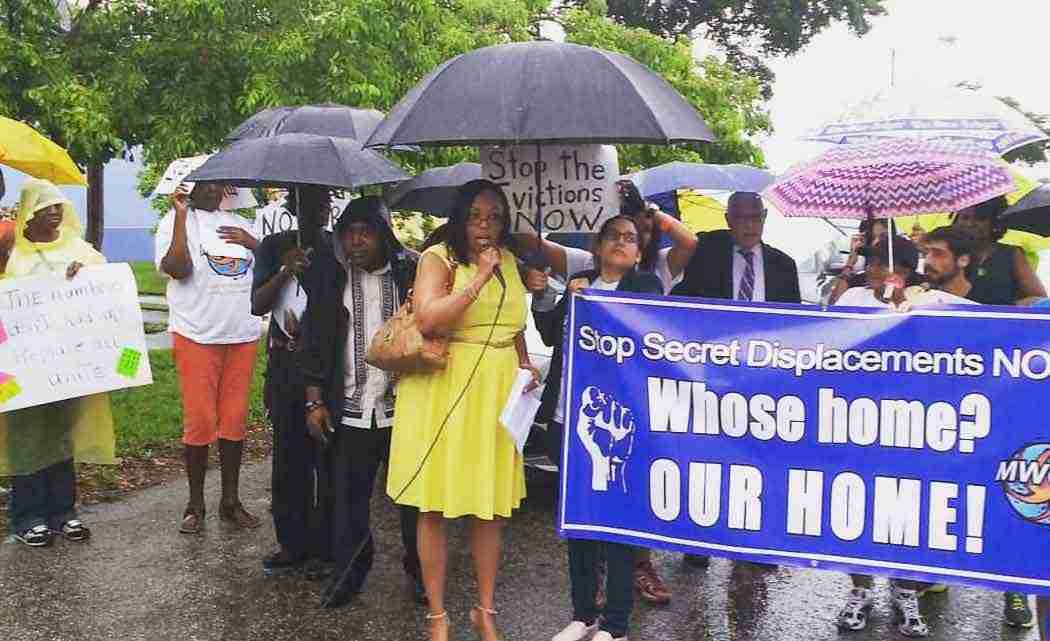 MIAMI — Armed with concerns about a plan to redevelop Liberty Square Housing Project, a group of residents and activists demanded on Thursday afternoon that Miami-Dade Mayor Carlos Gimenez and county housing officials provide reassurances that current tenants won’t be left behind once construction is finished.

“We want the people to get placed back,” said Elder George Gibson, “and they’re not just moved out.”

Residents of the storied development, commonly referred to as the “Pork and Beans” held a press conference near the Liberty Square tenant council office to bring attention to what they call a “public housing crisis and displacement” faced by residents and “callous redevelopment” plans. Joining them were activists from the Miami Workers Center.

Gibson and Rosalie Whiley, a former resident, said a main concern is that the number of available apartments after the renovations would be reduced and people would not be able to return.

Daniela Saczek, an activist with the Miami Workers Center, said she and residents had requested meetings with county officials, but were ignored. Instead, she said, they called for the press conference to press their point.

“They told us they couldn’t answer questions because of the cone of silence. We decided to ask the questions through a press conference,” she said.

Michael Liu, the county’s housing director, said he has met with the Liberty Square resident council and other tenants on several occasions.

Liu explained that the renovation plans call for at least 150 apartments to be built on  land near Bannerman Park specifically for Liberty Square before renovations start. He noted a similar process was used to move about 124 senior citizens from an Allappattah area complex.

“That will give us the ability to transfer families then start the demolition process at Liberty Square without displacing anyone so those people will have units to go to,” he said.

The press conference stemmed from an announcement last February by Gimenez who set forth his plan to redevelop Liberty Square. At that time, Gimenez said, “Once the work is done, residents will hear the sounds of construction and later the sounds of children at play.” However, tenants fear they will be pushed out of the community through the offering of Section 8 vouchers, and the emission of eviction letters for any minimal reasons and using criminal background checks to discriminate against the entire family.

Residents of Liberty Square are asking Gimenez to order Miami-Dade Public Housing Agency (MDPHA) to place an emergency hold on all section 8 vouchers, evictions and any other form of displacement that is currently occurring, until there is a concrete and transparent plan for relocation with the right of return and real one-for-one replacement. Also, they claim, despite repeated promises by the county, the current renovation plan does not provide for equal replacement of existing units.

“We don’t want secret deals between politicians and developers. We want a real say in our future.” Gibson said.