Advocacy of ‘Girls Trip’ star inspires give back in SFL 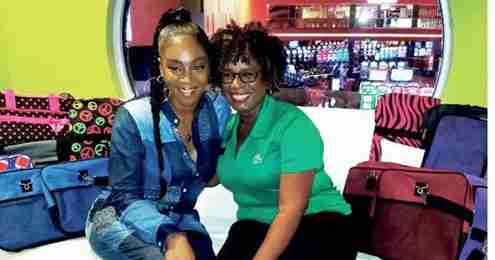 Haddish, who is a former foster child, champions the foster care cause. A representative from Kids in Distress (KID), the largest provider of services to foster care children in Broward County, was present to receive the duffle bags and to snap a photo with the burgeoning comic powerhouse.

said Mark Dhooge, Chief Executive Officer and President of Kids in Distress. “It is only through diligent and brave stories such as Ms. Haddish’s that all children who are affected by abuse and neglect will have their voices heard.”

Having held her own against Hollywood royalty like Queen Latifah and Jada Pinkett Smith in “Girls Trip,” Haddish has become widely known for her comedic prowess.

Her newest comedy special, “She Ready! From the Hood to Hollywood!” aired on Showtime last month. She recently played Nekeisha on NBC’s “The Carmichael Show,” and the L.A. native will star opposite Tracy Morgan in the Jordan Peele-directed TBS comedy, “The Last O.G.,” due out later this year.

“It’s not often we get the opportunity to bring together one of the biggest names in comedy and one of South Florida’s most ardent foster care advocates,” said Scott Savin, Chief Executive Officer of The Casino @ Dania Beach. “We were thrilled to donate the duffle bags on Ms. Haddish’s behalf, and we applaud her for advocating on behalf of this valuable cause.”