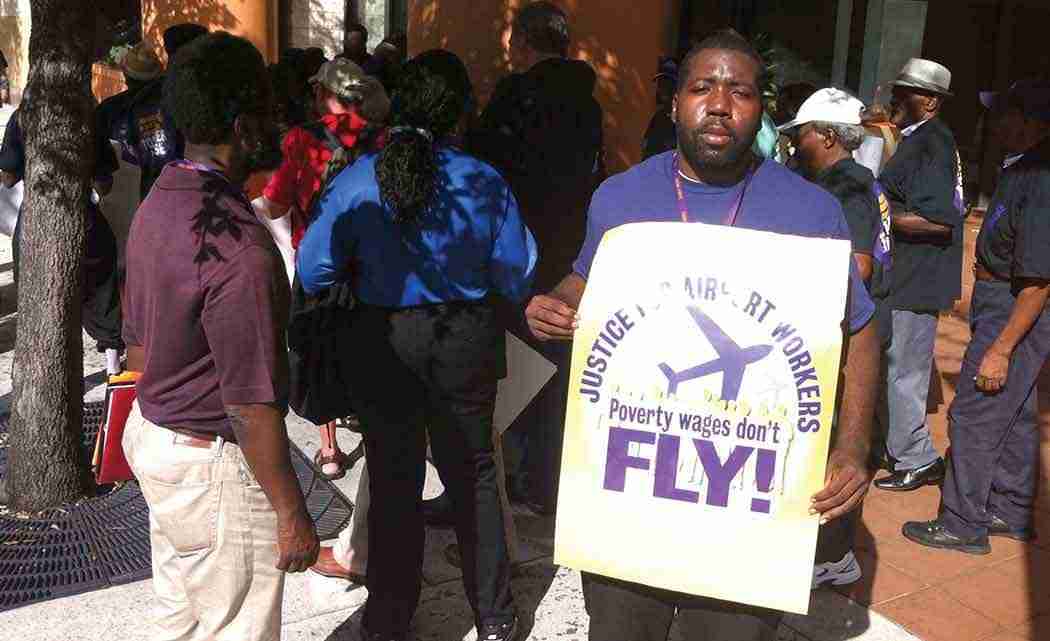 Ft. Lauderdale, Fla. — Despite wage increases at airports around the country that produce positive effects for both the workforce and the local economy, Broward County continues to have a loophole on the County’s Living Wage ordinance that has over 1,200 passenger service workers at Ft. Lauderdale Airport continuing to earn an average of $8.14 per hour. Not only is the rate significantly below both the County’s Living Wage and the federal poverty line, it is significantly lower than the $14.27 per hour that workers at nearby Miami International Airport earn.

The airport’s wheelchair attendants, janitors, and other airline-contracted workers earning poverty wages went on strike last week over unfair labor practices. The group has called on the Broward County Commission to close the loophole on the County’s Living Wage ordinance now that the initial draft of their own commissioned study has been completed.

A bill was introduced in May to close a loophole in the ordinance that excludes FLL’s contracted workers. During the May 9 meeting, the Commission gave the County Attorney 60 days to draft an ordinance to expand the living wage to contracted airport workers, as well as complete a study on the issue. A draft of the study was finally completed this month; however, the ordinance still has not been introduced.

“We simply cannot survive on the wages we are earning. You don’t need a study to tell you that,” said Sandra Smith, who travels two hours every day on a bus for her two jobs as a wheelchair attendant and cabin cleaner. “I love my job and I love helping people. But it’s not fair that I make so little I can’t even afford a one-bedroom apartment to live with my daughter. We need the County Commission to close the loophole so that we can make a [sic] better lives for ourselves and our families.”

Also testifying at the meeting was Ken Jacobs, Chair of the UC Labor Center who is a national expert on airline outsourcing and the resulting erosion of wages and benefits for sub-contracted airport workers.

“In recent decades the airline industry has seen a substantial increase in outsourcing which has undercut job security and lowered wages,” said Jacobs. “Inflation adjusted wages for ground-based workers in U.S. airports declined by 15 percent between 2002 and 2012. This was a greater decline than the average for U.S. workers as a whole, and is even lower than found in the low-wage food service and retail industries.”

At the San Francisco International Airport wages were increased by 33 percent for certain occupations, which resulted in dramatic reductions in turnover rates and absenteeism, as well as improvements in customer service.

Testimony by the National Employment Law Center also supported the benefits of a living wage increase at the airport.

“More and more airports across the U.S. are adopting living wages to ensure that these engines of local economies create family-supporting jobs.  From SFO to St. Louis to Miami, implementation has been smooth and years of experience show that these policies improve workforce stability and workers’ lives,” said Paul Sonn, general counsel of the National Employment Law Project.

Gueldere Guerellis, a wheelchair attendant and skycap noted that less than half an hour away, workers at Miami International Airport are earning as much as $14.27 an hour because they are covered by Miami-Dade County’s living wage law. “That’s just 20 minutes away but we’re paid so much less. It’s just unfair,” said Guerellis.

Guerellis says he only averages a couple of hours of sleep every night and barely sees his wife and three children because he works so many hours.

“A living wage would really give me peace of mind because I could spend more time with family. I haven’t done that for more than ten years. That’s a lot,” he added.