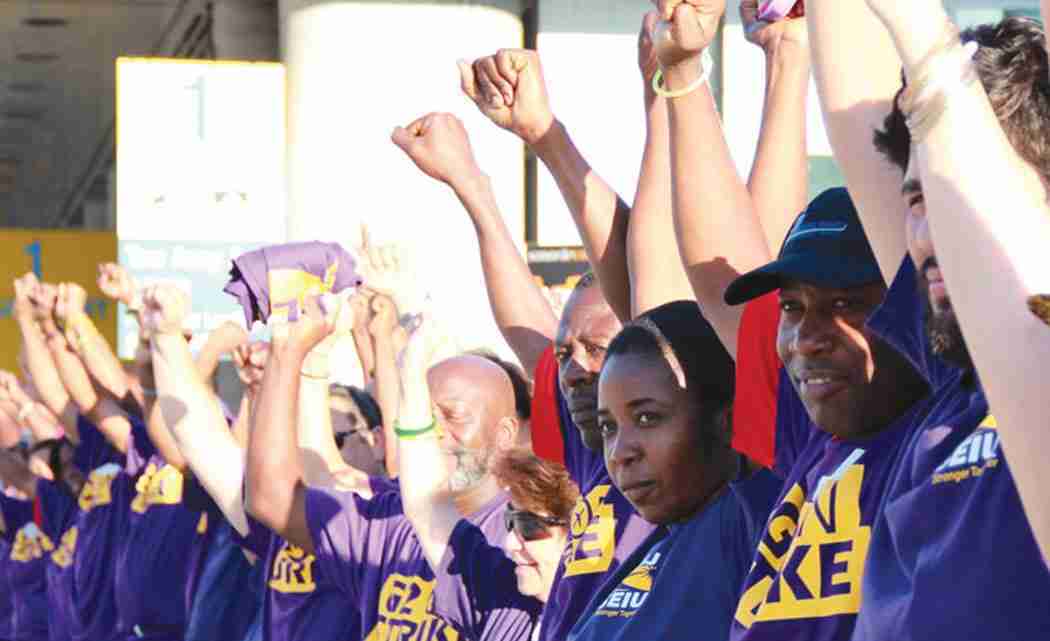 Fort Lauderdale — Dozens of airline-contracted wheelchair attendants at Fort Lauderdale-Hollywood International Airport went on strike on Tuesday to protest poverty wages and alleged federal labor law violations committed by their employer, G2 Secure Staff, which services Southwest and Virgin America Airlines. The National Labor Relations Board recently found probable cause to authorize a formal complaint against G2 for suspending workers in retaliation for exercising their rights to collective action and by interfering with its employees’ right to support their union and speak out about problems in the workplace.

“We are on strike because we can’t survive on what G2 is giving us,” said Nadege Cantave, a mother of four who works as a G2-employed wheelchair attendant, and has had her electricity shut off multiple times. Her husband works for G2 as well as a skycap, earning just $5.03 plus tips. “It’s hard to feed the kids and we don’t have enough to pay for rent.”

Because G2’s wheelchair attendants earn as little as $8.05 plus tips, without any meaningful benefits, many must work multiple jobs and rely on public assistance to survive. In contrast, other workers at FLL earn up to $13.20, while their G2 counterparts at Miami International Airport earn as much as $14.27 per hour. G2 workers at FLL are demanding wages at the level of G2 workers doing the same jobs at MIA.

Broward County Commissioners introduced a bill in May to extend the County’s Living Wage ordinance to include over 1,200 passenger service workers at Fort Lauderdale-Hollywood International Airport who earn an average of $8.14 per hour, significantly below the federal poverty line. However, they have yet to close this loophole which would inject an additional $14 million per year into Broward’s economy and communities.

A higher percentage of workers at FLL (29%) have to rely on public assistance than those at MIA (18%). FLL experiences significantly higher turnover among workers than MIA. High turnover rates are often due to poverty wages, resulting in a workforce that is inexperienced, and that may not be familiar with critical airport safety procedures.

As airlines make record-breaking profits (as much as $2.8 billion per year), and take advantage of FLL’s cheap costs (one of the lowest in the nation), Broward taxpayers pay airlines an indirect subsidy because their poverty wages leave workers reliant on public assistance, the protesters assert.

Workers also addressed the Broward County Commission and held a wheelchair-led march outside of the County Government Building with disabilities rights activists and clergy. For over two years, airline-contracted workers at FLL have been organizing for higher wages and better treatment on the job.

With more than 145,000 members in 11 states, 32BJ SEIU is the largest property service workers union in the country.