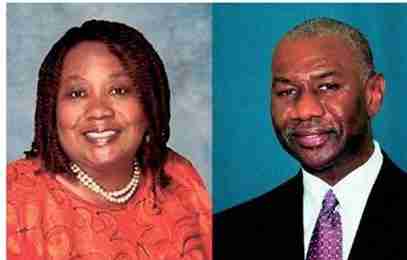 RIVIERA BEACH, Fla. – If there wasn’t enough bad blood in the City of Riviera Beach District 1 race, now, that has changed with the addition of a lawsuit filed by one of the candidates. Councilman Bruce Guyton has filed a lawsuit against his opponent Lynne Hubbard, alleging voter fraud – -just the latest twist in this nasty battle between the two since the March 15 election. In that vote, neither garnered the 50 percent of the vote needed to win.

That led to a March 29 run- off. That one was just as tight, prompting a recount. In the end, it was deemed to be a literal tie. That has led to yet another run-off, which is set for May 17, making it the third time voters will go to the polls to decide which of these two candidates will sit on the dais. Since the first election, each candidate has accused the other of wrongdoings and underhanded ploys to pull out on top.

But Guyton says he has uncovered some improprieties on the part of Hubbard’s camp, which would literally nullify the need for a May 17 second runoff. In Guyton’s lawsuit, which was filed two weeks ago, he alleges that three absentee ballots, cast by Hubbard’s relatives should be voided because the three claimed to live at Hubbard’s residence and they don’t. He says some of them don’t even live in the city and thus, can’t vote there. He says the relatives, identified in the lawsuit as Keenoe Lamont Stafanie, Larry Darnell Hubbard, and Ulysses Hubbard, all falsely claimed to live in Hubbard’s house.

If Guyton’s allegations are found to be true, then the three votes would be nullified and Guyton would be declared the winner of the May 29 election, he says. If that scenario plays out, there would be no need for the May 17 runoff. Guyton says he is asking the judge for a quick ruling. Guyton said anything other than a quick resolution would be unfair to him. In a telephone interview with Guyton last Sunday, he said he expects the judge to rule expeditiously. “If we don’t deal with it now, there would be irreparable harm to me. Why –if I won the last one (runoff), would there be a need for another one? We’re asking the judge to set a date before this scheduled second runoff.”

Guyton said he can’t take credit for discovering the information about Hubbard’s relatives, but it was good work by his staff. “People hired to assist with this campaign discovered it. Someone on my team discovered it, and then we got corroborating evidence. Yes, we have the evidence that would prove our case,” he said.

Guyton said he finds it curious that Hubbard has yet to refute his claims. “I’m waiting on them (Hubbard’s camp) to come out and refute it, but they haven’t done so. I’ve yet to have any of them refute the allegations.”

Hubbard responded to a request for comment from the South Florida Times with the following statement sent via text message: “Basically, I feel Mr. Guyton is trying to get the courts to do what he couldn’t get done at the polls. I think he had the City Attorney to fight and misrepresent the rules for the runoff elections and special runoff elections, and for his ability to continue to sit on the dais so that he could come up with little maneuvers like this.”

Hubbard and Guyton have known each other since childhood and grew up in the same Riviera Beach neighborhood. However, it is not the first time they have been on opposite sides. Guyton has been a strong proponent of developing the city’s marina and Hubbard was opposed to private development at the marina, which was a major battle in the city. After years of debate, votes and lawsuits, the voters decided to develop the marina and held a ribbon cutting ceremony recently to celebrate a multi-million dollar marina makeover.

Hubbard sat previously on the Riviera Beach council and is hoping to return to the dais.