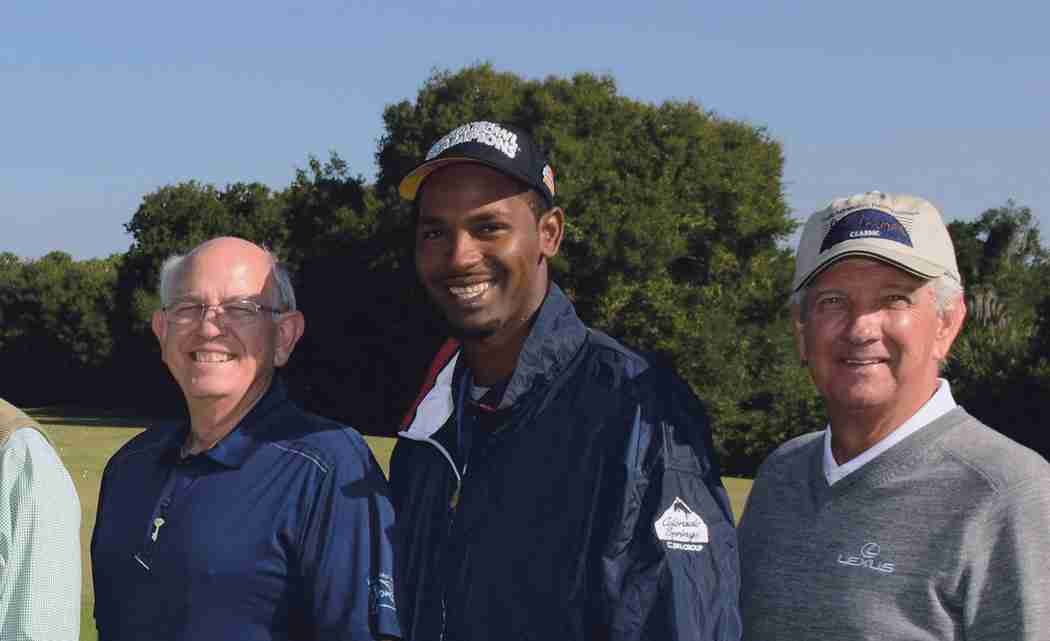 DEERFIELD BEACH — Growing up in a single-parent home with five siblings and a father serving 80 years in prison, Christopher Haynes struggled with his family’s hardships and was desperate to find a means to an end. Lured by the fast money on the streets, Haynes soon found himself serving time in juvenile detention for crimes that included drug dealing and grand theft auto.

It wasn’t until Delray Beach Police Officer Jean “Johnny” Pun brought him and a small group of high school drop-outs to the Youth Automotive Training Center (YATC) in 2003 that he believed life could be different.

Haynes, a 2004 YATC graduate, shared his story with more than 800 supporters at the 2014 Jim Moran Classic, an annual two-day golf and tennis tournament that raises funds to cover the yearly operating expensesof the school.

“I didn’t have positive men to look up to until I went to YATC and I was really lucky to have the best role models — Johnny Pun, Jim Moran and TerryRoutley,” Haynes said. “I built relationships with both the students and the staff, who were there for me. I looked forward to seeing them every day. They had become my family.”

Upon graduation, Haynes received a scholarship from YATC to continue his education at Tallahassee Community College. Currently, he is studying sociology at Palm Beach State College while working as an athletic director for troubled youth and raising his 4-year-old daughter, Kristoria.

He also explained what inspired him to give back to the youth in his area. “I will never forget the day I met Jim Moran in the shop,” he recalled. “He looked me in the eyes when we talked and at the end we shook hands. I wondered if he knew whose hand he was shaking, where I came from and what I had done, but he knew. Helping guys like me was his purpose and I felt that he cared, so even when I had hard times after graduating from YATC, I knew I could never go back to the life I had before.”

Established by automotive legend and JM Family Enterprises founder Jim Moran in 1984, the mission of the Youth Automotive Training Center is to train and educate at-risk youth in basic automotive repair, academic remediation, job readiness and life management skills. The goal of the program is to prepare young adults who are at a disadvantage in their lives to become self-sufficient, productive, law-abiding citizens. Students are referred to YATC in a variety of ways, including through the Departments of Juvenile Justice and Children and Families, as well as YATC graduates, local clergy and word of mouth. Each year, 30 students are selected out of nearly 150 applicants.

Another guest who delivered a moving speech was 21-year-old YATC student Anthony McClam. His role model growing up in Deerfield Beach was his older brother Elvin Holms, a YATC student who was tragically killed in 2006 when McClam was just 13. Entering high school, he coped with his lingering anger and grief by cutting classes and getting into trouble, which led to his expulsion one month before graduation.

In order to receive a high school diploma, McClam had to complete an alternative program. Following in his late brother’s footsteps, he applied to YATC and, today, he has a new attitude about life. He looks forward to being a part of the 36th graduating class, and believes that YATC will help him realize his dreams.

“My brother was my mentor and my best friend,” McClam said. “We talked about everything, like football and my dreams, and when he was killed, I stopped caring about life. But now, because of YATC I have a purpose. The staff treated me like I was part of a family and I feel like I am on my way to bigger and better things. I am thankful for the program.”

Since opening its doors, YATC has evolved from a one-room training center in Hollywood, Fla., to a 16,000 square-foot facility in Deerfield Beach featuring technical and academic classrooms, a computer learning center/library, state-of-the-art automotive shop, conference room and fitness area.

“Growing up during the Great Depression, my husband knew what it was like to struggle,” said Jan Moran. “He worked hard to overcome adversity, and it was through his own experiences that he could relate to the students and understand the many challenges they face. When he started the program, he wanted to give disadvantaged youth an opportunity to turn their lives around with the support of people who care. Jim would be very proud of the YATC staff, board members, and volunteers who continue to teach these young adults technical and life skills to help them reach their full potential.”

Of the 617 students who have completed the program, 142 have received their GEDs. More than 90 percent of graduates are gainfully employed, furthering their education or serving in the armed forces. Thirty-one graduates hold Auto Service Excellence certifications qualifying them as Certified Technicians, while 53 graduates on scholarship through YATC have earned or are pursuing an associate’s or bachelor’s degree. Alumni of the model program, along with their families, continue to receive assistance to keep them on the right track for success.

“Mr. Moran was a visionary who believed in second chances and that given the right tools, anyone can turn their life around,” said Terry Routley, executive director of YATC. “This training program has been helping young adults achieve their goals for 30 years and we thank our dedicated friends and sponsors for their generous support.”

The annual event celebrated YATC’s 30th Anniversary at the Hyatt Regency Grand Cypress in Orlando and was emceed by Emmy Award and Edward R. Murrow Award winner Doug Dunbar, television news anchor and reporter for KTVT-TV (CBS 11) in Dallas/Fort Worth.

Jump Start Golf, a special event held on Friday for the Super Big Heart and Big Heart Sponsors, gave 100 golfers the opportunity to participate in a round with celebrity guests. During Saturday’s tournaments, more than 320golfers and 40 tennis players participated in the programs. World Golf Hall of Famer Chi Chi Rodriguez and golf pro Mark Pfeil conducted the golf clinic, while the tennis clinic and tournament were led by Hall of Famers Wendy Turnbull and Virginia Wade and tennis pros John Lloyd and Duby Petrovich. Young guests participated in “Adventures in Inventing,” a special science-themed Kids & Teens Program, which included day and evening activities.

JM Family Enterprises and Southeast Toyota Distributors donated a 2015 Toyota Camry for the raffle prize and Colin Brown, president and CEO, pulled the winning ticket for Wonga Evans, a JM Family associate from Mobile, Ala. The Silent Auction featured a painting created and donated by James Gibson, an original Florida Highwaymen artist, as well as a custom automotive-themed lamp built and donated by Buz and Lynn Altmann of Innovative Design Specialties — who also designed and constructed the Jim Moran Classic golf and tennis tournament trophies.

In addition to volunteering their time, celebrity supporters — such as NFL greats Olindo Mare and Joe Montana — also donated autographed memorabilia to the Silent Auction. Fanatics Authentic provided other select sports collectibles for the auction.

Also auctioned were a 2015 Harley-Davidson Ultra Limited FLHTK motorcycle and a five-night stay at Destination Daytona for Bike Week donated by Bruce Rossmeyer’s Daytona Harley-Davidson. Proceeds from the motorcycle auction will go to the Bruce Rossmeyer Memorial Kick Start Scholarship Fund at YATC to assist graduates who want to pursue their education at a vocational or technical school.