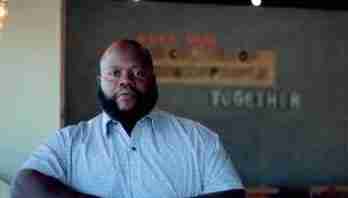 The phrase ‘Renaissance Man’ is defined as an outstandingly versatile, well-rounded person; a person with many talents or areas of knowledge. It could also be used to define Beethoven Francois.

The Riviera Beach resident is building an empire Connecticut, spent about three years in Atlanta before relocating to Riviera Beach.

“I started off in the entertainment industry in the predominately black community that is big on giving back.

Francois, who was born in Haiti and raised in Connecticut, spent about three years in Atlanta before relocating to Riviera Beach.

“I started off in entertainment industry promoting concerts,” Francois said during a telephone interview. He left Atlanta because there were “so many people doing the same thing.”

His life now centers on launching new businesses that serve a need in the community and mentoring youth to expose them to something more than they’re accustomed to seeing.

Riviera Beach offered fertile ground for his business ideas while also providing him the chance to make a bigger difference by engaging its youth. His flagship business, Kafé Hub, is a popular restaurant that does significantly more than serve food.

“Café in Creole stands for coffee in my culture. Coffee is something that brings people together,” he explained about his motivation for opening the 4,700 square foot restaurant, which is within walking distance from key landmarks of the Riviera Beach Marina District and Port of Palm Beach and provides a co-working space for local entrepreneurs.

Open for only five months, Kafe Hub was an instant success. A soft opening to which Francois invited 30 people was attended by 350. And a monthly poetry showcase brings in between 150 to 200 people. Sunday Brunch, with menu items like chicken and waffles and shrimp and grits, “gives the community a space to hang out after church,” Francois shared. And readers also congregate to take advantage of the growing library, thanks to people in the community dropping off books.

The self-taught businessman honed his craft by watching YouTube videos, reading books and visiting over 400 cafes around the country.

His mother, Marie Emile, sensed something special about her son when he was born.He said his mother named him Beethoven and told him, “I’m going to give you a great name because I expect you to be great.”

His motivation for each publication was to meet a community need. In the case of Taste of Singer Island, “there were thousands and thousands of people coming in but they don’t know where to go,” he said of the lifestyle magazine.

The rationale behind Good News Riviera Beach was to “promote good things happening in the community instead of all the negative,” Francois shared.

Mentoring plays a very significantrole in his life. He counts among his mentors, several men in the community, but especially his father, Pepion Francois and his godfather, Steve Gogola.

“Mentoring is one of the most important things as a black man to receive and to give,” he shared. “I mentor kids every day, I mentor adults.”

Recently, he and his friends Cory Smith and Michael Seville took a group of kids that got into trouble…on a boat ride to Pina Island. The kids, he noted, had never been to the marina despite living in the community.

He has no tolerance for people who “sit back and complain andwrite about it on social media. We’re waiting for government to magically put it in our community.”

Exposing youth to the possibilities for their lives is the underlying theme for his work.

“So many kids now believe they can own a café, a PR and marketing firm because I did it and I’m from that same community.”

For critics who want him to tone it down, he says, “I’m a purpose-driven person and at times my aggressiveness gets in the way of who I am at heart. I’m focused, I’m determined. I don’t have the time to play with people’s lives or to play with my own life.”

He adds, “I’m not in the hope business, I’m in the faith business and I’m grinding.”

Isheka Harrison contributed to this story.

Next post This black techie is making history FROM SOUTH FLORIDA