Beloved teacher is the essence of art 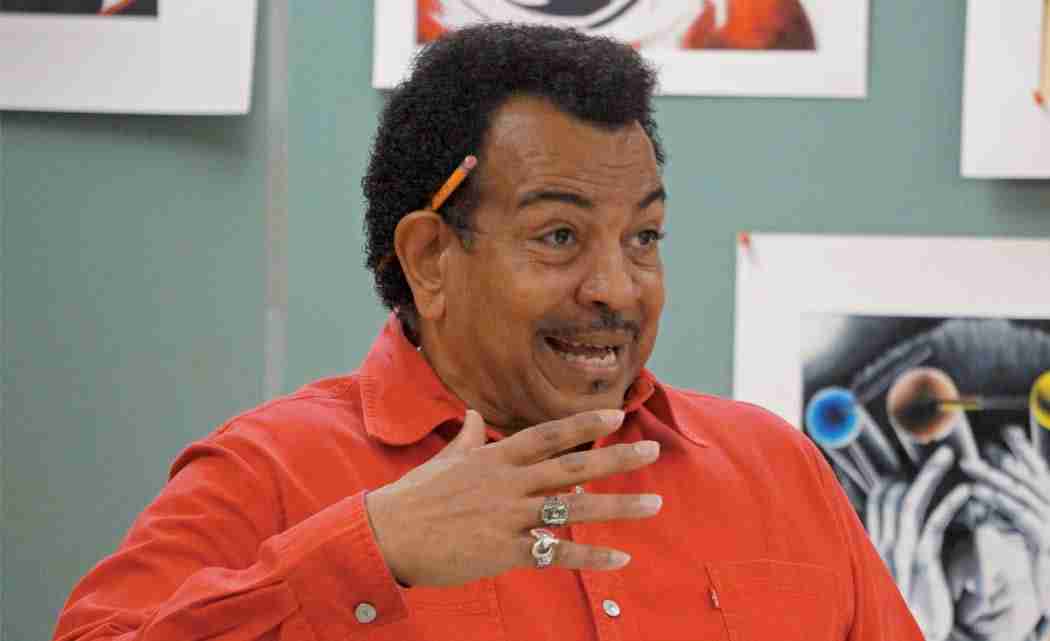 His seemingly ageless appearance and energetic personality have been mainstays at Miami Jackson Senior High School for decades. When the entrance to his beloved art class became a revolving door with three teachers passing through in less than two years, he was asked to cut his 2008 retirement short.

Eric Jenkins, 63, said he was literally “on the beach with my toes in the sand” when he got the call asking him to come back. He returned in 2010 but plans to make 2016 his final year so that he can get to some of the ideas “The Lord keeps giving me,” he said.

The first art award he ever received (he was 6-years old) shares space on a bulletin board in his classroom with other honors and newspaper articles from over the years. His students’ art is on display throughout the classroom, in a display case just outside the room and will be featured in their very own gallery in the near future when Jenkins’ plans to convert the adjacent classroom are complete.

His love for the high school located on NW 36th street in Miami runs deep; pre-dating his employment there. As a 1965 Jackson high graduate, Jenkins’ post collegiate plan was to return to his alma mater to teach art, however, because the principal thought he was too young and too handsome, he steered him to a middle school instead. “He thought the girls would get me into trouble,” Jenkins conceded.

A chance encounter with a Jackson football coach at a local restaurant led to Jenkins being hired as an assistant coach. His success as an assistant morphed into a head coaching stint for the junior varsity squad; a position he held for eight years simultaneously with his art teaching duties.

Because of his tendency to go above and beyond in everything he does, “I couldn’t do both,” he said; ultimately convincing the administration to allow him to relinquish his coaching position so he could focus on art exclusively.

The switch paid off because during his first year teaching art full time, the number of college scholarships awarded to Jackson’s art students went from zero to four. And his students’ work became known throughout the community.

“We’ve had exhibits on the steps of the courthouse downtown, at the University of Miami, Miami-Dade, the school board building, and FIU. We’ve done community service for churches and preschools.  My kids have won billboard contests. We won five in a row. Kids’ work was put up on billboards throughout Miami-Dade County,” he shared. “We won the congressional art award seven times.”

While his students’ art is not currently on public display in the community, they continue to receive invitations to participate in off-campus exhibits. Just last week, some of the students’ art was on display in a Black History Month exhibit at the Doral campus of Miami-Dade College.

Stephenie Collie, 18, is the president of the art club. Her fascination with art and her teacher showed as they discussed a sketch that he completed of his girlfriend’s late father.

“Mr. Jenkins is an amazing teacher,” she said.

Admiration for Jenkins also comes from his boss, Carlos Rios, Jackson’s principal for three years. Rios said the school is “back to the days of old when [it] was a beacon of light for this community.”  After a rough period where it was ranked a ‘D’ or ‘F’ in the state’s rating system for a number of years, he  said the school has improved significantly and is now one of the highest performing schools in its district; earning two A’s and two B’s over the past four years.

He attributes the success to hard work, focused students and “great work from our very dedicated teachers here who stay long after the school day is over.” Jenkins is one of those teachers who has been advised to leave by the school’s custodians so they could turn off the lights before exiting the building in the evening.

“When I got here three years ago, I knew about two gentlemen, Mr. Jenkins and Mr. Bryant. Both had been at the school for 40 years. The love that his students and former students have for him, people always talk about Jenkins and the affect he had on them professionally and obviously during their time here,” said Rios.

And while art programs all over this district have declined, “here at Jackson it’s stronger than ever,” thanks, he said, to teachers like Jenkins.

Next post Suspect in blast near NAACP office: Target was accountant