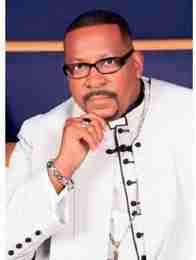 MIAMI, FL. – Like other places of worship, New Birth Baptist Church was packed on Dec. 31. Standing room only, in part, because people like to bring in the New Year prayerfully.

Unlike other churches, however, many attended because the church’s beloved pastor, Bishop Victor Tyrone Curry, was set to deliver his first sermon since experiencing a massive stroke nearly one year ago. Curry was found unconscious by his sister at his home on Jan. 10, 2017 and has been involved in intense rehabilitation since.

Landor ‘Jose’ Miller, New Birth’s minister of music, called out possible voyeurs; apparently aware that some were present out of curiosity. He also honored the sincere ‘Birthers’ who have been there since their leader’s medical emergency.

After a couple of hours’ worth of prayer, praise and worship through song, Curry emerged onto the dais to a loud burst of applause and cheers. He sat for several minutes, tapping his foot along to the music and at times, bowing his head.

When the moment finally arrived for Curry, former president of the Miami branch of the NAACP, to take his place at the podium, he was met with a rousing standing ovation, shouts of “hallelujah,” “praise the Lord,” and “we love you, Bishop.”

Displaying no visible evidence of having had a massive stroke, Curry exuded palpable gratitude, slowly thanking several groups of people. He began by acknowledging his sons and daughters in the ministry before including his family, friends, deacons, trustees, doctors, nurses and speech therapists.

“I thank God for everyone,” Curry said in a strong but noticeably softer voice than the booming preacher’s intonation he has used for more than 25 years as senior pastor of New Birth.

He used the large screens at the front of the church to help deliver his message; asking the obliging congregation to assist him with the word “trustees,” when projected onto the screen.

Before delivering a short sermon that was powerful in its simplicity, he shared, “People don’t understand this. I should have died,” apparently referencing the magnitude of his ordeal.

The congregation responded with more applause, cheers and encouragement when he thanked them for their prayers. “You prayed for me,” he shared. “No, you missed it, you prayed for me. Others not of this church prayed for me.”

His sermon centered on “three words God gave me tonight.” The words were “pray, peace and praise.”

“So much has happened. All I wanted was God’s mind. All I ever wanted…My mind was so messed up. I’m trying to live my life, because I needed God to give me His mind.

Peace. The peace of God,” Curry explained. “It was a time for me to trust in God.”

He focused on “praise,” the third of the three words like this: “Everything that happened to me, the only thing I could say to God, thank you Lord. All I can tell God is ‘I Love you Lord.’”

While he stumbled over a couple of words, glimpses of Curry’s formerly robust sermons poked through as he encouraged the spirited congregation, now on its feet and responding to his every word with “amen,” ‘hallelujah,” “praise the Lord,” and thunderous applause.