Black Basel did not disappoint 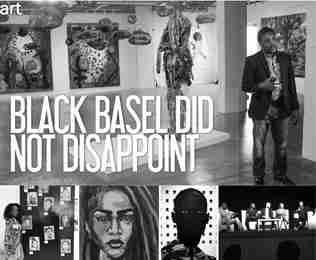 This year’s Black Basel exhibits were full of passion, talent and creativity.

MIAMI – This past weekend Miami was filled with people who’d come from across the globe to participate in the annual Art Basel festivities. For years, Black Miami has worked for more inclusion of black artists, particularly those who are local, and their phenomenal works that depict an authentic black experience.

This year, Black Basel did not disappoint. The movement was in full swing with exhibits like Art Africa Miami, Ode to Hip Hop, Funky Turns 40: Black Character Revolution, Urban Soul Experience and more.

There was no shortage of events during which blacks could be on their best #BaselBehavior – and in addition to the stunning visual art, there was great food, music, films and camaraderie.

Here are a few events we deemed worthy of post highlights. If you missed them, you definitely missed out! Luckily, we didn’t so South Florida Times can give you a mini-recap.

During this pre-Basel event, Freeze Frame Marketing partnered with BME Community to showcase black men’s genius once again, but this time through art.

The expressions from each artist were so diverse. Mano’s pictures depicted the beauty of the black woman while T.I.M depicted subjects and even Ninja Turtles with grills as homage to Miami culture.

Williams painted tributes to fallen youth 10-year-old Alton Banks and 18-year-old Malcolm Nicholas to honor their memories. He promised to give each painting to the young men’s mothers. Banks’ mother, who was present, was so choked up with the gesture, she had trouble speaking.

Benjamin Evans and Cedric Dawkins of BME Community and Freeze Frame Marketing, respectively, said they felt it was their duty to put on the event.

“For years we (blacks in Miami) always complained that there’s nothing for us at Art Basel. They come in, they use our neighborhoods, hike the prices up for rent and facilities and … we said we’re done with that. We want to do our own thing and celebrate our own art and stop trying to be invited to somebody else’s party and just create our own party and what better place to do that than Overtown,” Evans said, revealing they targeted unknown local black male artists to provide them with exposure.

“I felt like BME was the perfect partner for the event because the different events they’ve done always promote different areas of black men who are achieving things in areas where other people don’t always look. I’m excited. I actually can’t believe it came out as well as it did. This is great. It exceeded my expectations,” Dawkins said.

THE ART OF CONVERSATION

It’s always special when ‘FAMUly’ gets together. During this networking mixer presented by City of Miami Commissioner Keon Hardemon, audiences were treated to a special screening of the season two premiere of the hit web series “Giants” – written and directed by FAMU alum James Bland and produced by Insecure’s Issa Rae and Empire’s Jussie Smollett.

The series follows a group of millennials living in Los Angeles and the challenges they encounter while trying to get their lives in order. It touches on issues like mental health, morality, financial challenges, familial relationships, coming to grips with identity and more.
After the screening, some of the cast and crew did a Q&A panel moderated by another FAMU alum, Benjamin Evans, whose actor name is Benjamin Carlton. The cast present included Bland (Malachi), Vanessa Baden (Journee), Sean Samuels (Ade), etc.

“As the digital space continues to grow, we no longer have these gatekeepers deciding how and when we put content out,” Bland said in response to a question about how the digital space has changed the landscape of the TV and film industry for black creators. “The job of the artist is to reflect the times. What ‘Giants’ is doing is giving us a mirror to see ourselves.”

The evening also offered a platform for Generation X and Millennial professionals to come together and converse, while enjoying music, cocktails, passed hor’deouvres and art at the historic Lyric Theater in Overtown.

“Hip hop is more than music, it’s a lifestyle.” We’ve all heard this quote before and we also know it rings true. So it was only fitting a Black Basel exhibit paid homage to the culture.

The Miami Urban Contemporary Experience presented a pop-up installation at the Little Haiti Cultural Arts Complex dedicated to hip-hop culture and some if its most iconic figures.

She said she was inspired to do the series because Miami rappers don’t get the same level of support as rappers from other cities.

“At first I decided to do a couple of them to showcase and sell my work. I didn’t know it was going to turn into an entire series,” Presil said. “At the end of the day I wanted to highlight them and show them some support.”

The 6th Annual Art Africa Miami Fair delivered all it promised with showcases of magnificent art from over 25 talented black artists. The event included lectures from artistic experts as well as artist talks. This year, the fair spanned two locations and included pieces from visual paintings to wire sculptures. It is always a Black Basel favorite and we hope it will continue to be for years to come!