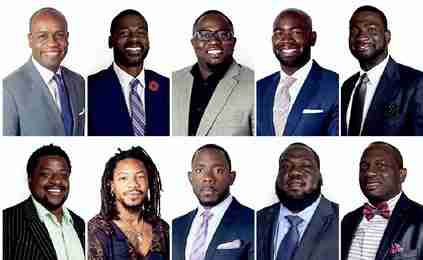 MIAMI – In an era where black men are frequently in the news as either victims or perpetrators of violence, a national organization is spotlighting and awarding ten South Florida black men with $10,000 each for their community programs after being named Miami’s first “BMe Leaders.”

The prestigious honor is presented by BMe Community, a social network for people of all races and genders who demonstrate a commitment to making communities stronger. BMe Leaders are black men chosen for their community service and their ability to inspire.

BMe Community was incubated by the John S. and James L. Knight Foundation until its 2013 spinoff. Today, BMe has 165 BMe Leaders in six cities providing education, public safety, and economic services to over 500,000 people every year. “Our mission is to build more caring and prosperous communities inspired by black men,” said BMe Community founding CEO, Trabian Shorters. “BMe Leaders do that, and they represent millions of unsung black men who lead the nation in service, enterprise and generosity every day. BMe shows this is who we are, and builds upon it.”

“I share that belief,” said Knight Foundation President, Alberto Ibarguen. “From the beginning, the basic BMe premise has been that black men and boys are community assets. At Knight, our ideal is an informed and inclusive community where all citizens can engage in deciding their true interests. We couldn’t be prouder of the Miami BMe Leaders who are living that ideal.”

BMe posits black men are assets but the social network is open to all people and has over 22,000 members of all races and genders.

On June 30th BMe and its partners are hosting “Better Together Awards” to celebrate Miami’s diverse men and women “Community-builders.” “That’s because BMe isn’t about black men,” said BMe-Miami Community Manager, Benjamin Evans III. “We’re about better communities. We’re the social network for people who believe we can make things Better Together.” BMe is backed by donations and leading phi- lanthropies including the Campaign for Black Male Achievement, The Heinz Endowments and The William R. Kenan Jr. Charitable Trust.

Next post James and Jones appointed to Criminal Justice Commission