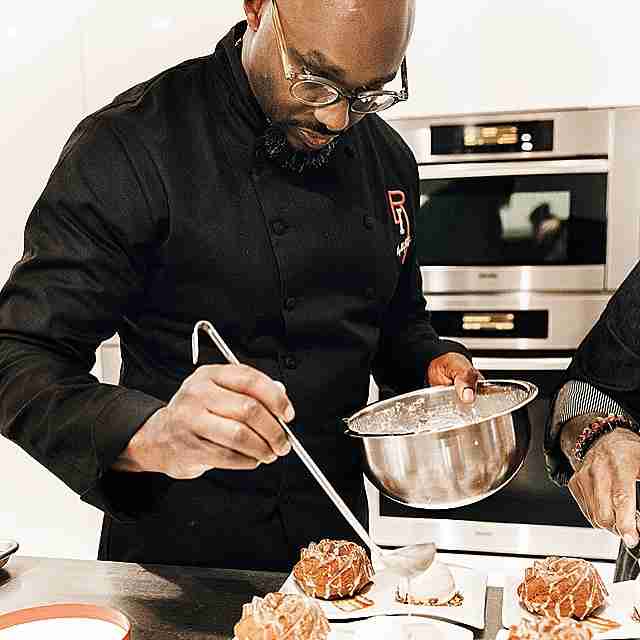 MIAMI – From anyone’s point of view, his is a charmed existence. He cooks for one of the most beloved athletes on the planet and he and his business partner run an innovative company that brings together star jocks and talented personal chefs.

Arriving at this coveted place was not the ultimate goal; however, a retrospective review reveals how each experience was pivotal for the creation of a life beyond anything Richard Ingraham ever imagined. He is a part of Dwyane Wade’s inner circle, feeding the former Heat guard, his wife, actress Gabrielle Union and Wade’s children as their personal chef.

“My love for cooking came from my grandmother and my mother,” he recalled, sharing his memory of his grandmother’s lemon pound cake and his disbelief at its amazing fluffiness. He remembers his mother’s after work routine that had her removing her dress as soon as she walked in from her job and cooking in her slip, “because she knew she was so tired that if she went into the room, she would probably go to sleep, and we wouldn’t have dinner.”

Homegrown (Ingraham graduated from Miami Norland senior high in 1988), he’ll be taking his talents to Chicago in a few months, following his boss/friend as each embarks on a new phase of his career. Big on trusting his instincts, Ingraham senses that life in the windy city is poised for something far larger than his vision. It was following his gut, after all, that led him to doing what he loves as a profession.

His path included “detours” to Tallahassee for a stint in the ‘Marching 100,’ back to Miami for an unconventional yet hugely successful role as a hairstylist and up the road to Atlanta to contribute to what is now a respected culinary program at Booker T. Washington high school.

Unconventional is his trademark. When a reporter extended a hand for him to shake, Ingraham instead leaned in for a hug; characteristic of his willingness to challenge expectations and, as a result, achieve a more authentic outcome. (What was slated for a ninety minute interview turned into a three-hour conversation in the commercial kitchen of the Miami Culinary Institute, where he serves as a board member.)

It was during his second return to Miami that he landed in the kitchen of one of the city’s most respected millionaires, the late Alvah Chapman, (founder of Community Partnership for the Homeless) while simultaneously feeding the homeless; a juxtaposition he credits with helping to shape his balanced outlook.

He laughs about his employment interview with the Chapmans, which he said was exhaustive. At its conclusion, he said Mr. Chapman had one final question. “How attached are you to that earring in your ear,’ Ingraham recalled being asked. “I reached in my ear, took the earring off and put it in my pocket and said, “What earring?”’ He got the job.

Like the African Sankofa bird, Ingraham looks back for inspiration while simultaneously eyeing the future with hope. His journey is full of ancestral parallels as he continues to chart an unscripted path. As an adult culinary student, Ingraham experienced a déjà vu moment that brought to mind childhood memories of his father’s late night study sessions; and he was pleasantly surprised by a recent discovery that his grandfather was once a chef.

His journey reads like a feel good Hollywood script, including recognition as a regional ‘2008 Teacher of the Year,’ while employed at the South Dade Adult Education Center.

There, his students included the homeless as well as exceptional education students bussed in from surrounding schools. During the process to assess him for the “Teacher of the Year” honor, the committee visited his classroom. What they saw blew them away.

Kids diagnosed with emotional and behavioral problems who “were not supposed to be touching knives because everybody was so scared about what they might do,” were expertly filleting red snapper and preparing food without supervision, just as Ingraham had taught them to do.

Ingraham said the honor was “so great for the school, so great for my kids.” He explained his effectiveness with them like this: “I didn’t teach them out of a book, I taught them on an individual basis.”

The students’ demonstration for the committee also included the preparation of   his “untraditional peach cobbler,” which       required the addition of a Courvoisier- induced flame that the students managed like pros.

“They were able to see what I saw in these kids,” he added.

His journey to becoming Wade’s personal chef includes more of him being at the right place at the right time with the right attitude. While working as a personal chef for the Chapmans and teaching culinary arts at Miami Northwestern senior high, a friend informed him that Wade was looking for a chef.

Aside from a brief return to Atlanta, during which time he flew back and forth to continue cooking for Wade, Ingraham has been the family’s personal chef for 12 years.

A brief conversation between Ingraham, Union and Wade, who is now a member of his hometown Chicago Bulls after 13 seasons and three NBA championships with the Miami Heat, led to the launch of Ingraham’s business, ChefRLI, LLC.

When Wade’s Miami Heat teammate, Chris Bosh, needed a personal chef, Wade and Union shared the news with Ingraham. They also told him that they’d informed Bosh that Ingraham’s company could locate and place a qualified chef with him.

He said his reply to Wade that he couldn’t do it was met with laughter, so he turned to the Mrs.

“I say ‘Gabby, I don’t really have that part of my business.’” Her response was, “figure it out,” Ingraham said.

He and business partner, Soley Gonzalez, did just that and the rest, as the saying goes, is history.