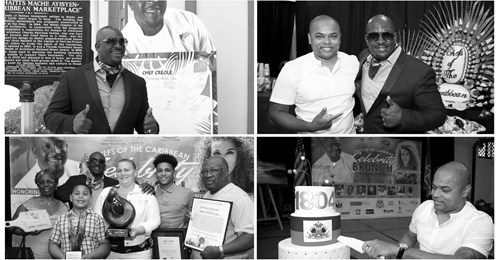 PHOTOS COURTESY OF CHEFS OF THE CARIBBEAN

MIAMI, Fla. – City of Miami Commissioner Keon Hardemon, Chefs of the Caribbean and the Northeast 2nd Avenue Partnership presented Chefs Of The Caribbean Celebrity Brunch on May 18 during Haitian Flag Day at the Caribbean Marketplace in the heart of Little Haiti.

In honor of the occasion, Sheila Be sang the Haitian National Anthem and American National Anthem, saxophonist Wil Marcelin serenaded the guests and Kanis performed Haitian classics and her original songs.

Celebrity Chef, restaurateur, philanthropist and community activist Chef Creole was honored for his contributions to South Florida’s culinary arts scene during the past 25 years at the event.

Chef Creole owns and operates five restaurants in Miami. In addition to his entrepreneurial endeavors, he is a community leader and advocate. He is the cofounder and vice president of the Little Haiti Optimist Club & Foundation.

For the past ten years, Chef Creole has distributed more than 10,000 toys and bikes to kids in the community. Most recently, during the government shutdown, Chef Creole fed TSA workers and customs agents at Miami International Airport.

His restaurants and culinary talents have been featured and recognized on television and in many national and local publications, including Anthony Bourdain: No Reservations CNN-TV, NBC6-TV, Gourmet Magazine, Vibe Magazine, Source Magazine, Miami Herald, Miami New Times Newspaper, Miami Times Newspaper and more.