Church builds bridges to save lives 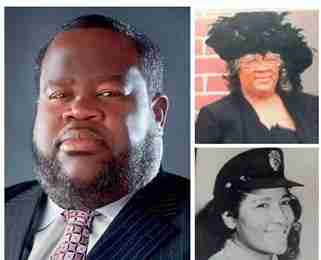 William E. Cooper Jr. (left). Top right: Maude Vereen today at age 85 and below in 1958 as a rookie police officer.

The sirens have been heard around the world. Police sirens, responding to a random call – sometimes just for a broken tail light, and others for a man hustling cigarettes in front of a store. But in the end, someone ended up dead – seemingly for no good reason at all.
Senseless murders.

Over the past few years, unfounded murders of black men and women have popped up all across this country at the hands of those designed to serve and protect. But why? Why does it seem as though police have no regard for black lives? In fact, in the viewpoint of the black public – it appears quite apparent that black lives DON’T matter … at least not to cops, many say.
But when you speak to law enforcement officers across the board, they say that’s not true. Black lives and ALL lives do matter to them, they say. They point out that the majority of the police officers out there are good cops and in fact wanted to be a police officer in the first place in order to serve the public in the best ways possible.

That’s the reason they signed up for the job, they say in defense of their profession.
But somewhere there’s a disconnect between the public perception and the perception of law enforcement when it comes to primarily black males. The two perceptions seem at opposite ends of the spectrum. So for that reason, a black church in Belle Glade is doing something about it!

“ But somewhere there’s a disconnect between the public perception and the perception of law enforcement when it comes to primarily black males. The two perceptions seem at opposite ends of the spectrum. So for that reason, a black church in Belle Glade is doing something about it!”

At a time when tension between law enforcement and the black community is high, Mt. Zion AME Church in Belle Glade is working to bridge the gap and recognize those public servants who serve and protect our community. The 27th Annual Maude Vereen Law Enforcement, Public Service, and Military Appreciation Day will begin this Sunday, May 21 at 11 a.m. at the church, located at 908 SW Avenue “B” Place in Belle Glade. The program will recognize Palm Beach County’s finest as well as school police, probation officers, paramedics and military personnel.

Ironically, the appreciation day is named in honor of Maude Vereen, who made history in 1958 by becoming Belle Glade’s first woman officer to be named on the force. Today, Vereen is still active at Mt. Zion AME and in the community at 85 years young! She is a former “Citizen of the Year” in Belle Glade and has outlived four of her six children. She is the oldest mother, attending Mt. Zion regularly.

“On both sides, nobody wants to wait these days. Everybody wants to take actions into their own hands,” Vereen explained of law enforcement today. “We do have some good officers, but nobody wants to listen. We need to learn to have a listening ear and then internalize what they’re saying and we’ll get more out of it. I got more accomplished without a gun. I have so many young men that come up to me today and tell me how I changed their life by just by talking to them.” Oddly enough, Vereen never used or carried a gun during her entire tenure spanning 40 years. She didn’t feel she needed one and perpetrators she encountered never knew whether she had a weapon or not since she carried a satchel with her. “I got more accomplished with words. But who knows, with today’s generation I might need one.

“The young people today don’t get as good home training. But as older people we don’t reach out enough to save them.”

“Everybody wants to take actions into their own hands,” Vereen explained of law enforcement today. “We do have some good officers, but nobody wants to listen. We need to learn to have a listening ear and then internalize what they’re saying and we’ll get more out of it. I got more accomplished without a gun.”

Vereen said she is looking forward to Sunday’s ceremony and believes this year will be special for all involved.

Reverend William E. Cooper, Jr., Pastor of Mt. Zion, said he too, believes Sunday will be special because his church is working on bridging the gap.

“This event is very important because as a church we want to be a bridge and provide neutral ground where both sides can be heard. Our young people need to see officers up close and personal and not in a confrontational situation. And officers need to see that these young people are not all criminals,” said Rev. Cooper. “We need to break bread together. Education is the key to expectation.”
Cooper said cultural training among officers is critical.

“From a police perspective, there’s a lack of cultural sensitivity. And in instances of black males, our nonverbal communications can become an issue. As an officer, they’re trained to respond if they perceive their life is in jeopardy. We need to teach our children how to respond if stopped by an officer because that 15 minute encounter can go terribly wrong and turn deadly. And that’s not called for. There needs to be a greater cultural training on both sides. We need to be taught how to respond so that we’ll live past the moment,” Cooper explained.

The keynote speaker will be Leonard Mitchell, Assistant Police Chief in Riviera Beach. Prior to being hired by Riviera Beach, Assistant Chief Mitchell was employed by the Palm Beach County School District Police Department for 24 years and retired in March 2007.

Assistant Chief Mitchell will share his years of experience in law enforcement and the benefits of being a public servant to bring an uplifting message to this year’s service.

The service will also feature gospel music by the Mt. Zion Mass Choir and a special prayer of protection for all those public servants attending the program. Following the service, Mt. Zion will provide a fellowship dinner for all attendees.

“We want the law enforcement community to know that we appreciate and support their efforts to make our communities safe on a daily basis,” said Rev. Cooper.“Mrs. Vereen realized some 30 years ago its nice for the community to say thank you to its public servants. The church plans to keep this appreciation service as part of its annual tradition.”

The public is welcome to attend.