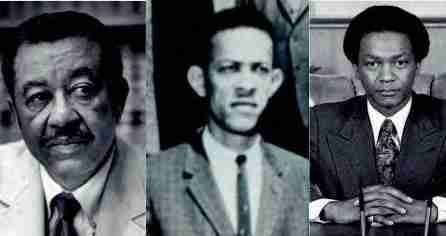 PHOTO COURTESY OF COJ.NET AND JACKSONVILLE.COM

TALLAHASSEE, Fla. – Three icons of civil rights history in Florida were inducted into the Civil Rights Hall of Fame in Tallahassee on Thursday, May 12. Jesse J. McCrary Jr., Earl Johnson, and Rutledge Henry Pearson were chosen from among a list of 10 distinguished nominees selected by the Florida Commission on Human Relations for making significant contributions to the improvement of life for blacks and all citizens of Florida and beyond.

As a student at Florida A & M University, McCrary helped organize sit-ins in Tallahassee against racial discrimination. After graduation, he served in the United States Army and received an honorable discharge as a First Lieutenant. McCrary went on to become the first African-American lawyer to argue before the United States Supreme Court on behalf of a southern state. He later became the first African-American in the south to be appointed to the United States Circuit Court of Appeals. During his life, McCrary argued many landmark state and federal cases including Neil v. State, which prohibited the dismissal of jurors solely on the basis of race. In 2002, the Florida A & M College of Law founded the Jesse McCrary, Jr. Chapter of National Black Law Students Association and in 2013, the Little River Post Office in Miami was dedicated and renamed in recognition for his work as a civil rights pioneer.

Earl M. Johnson (1928-1988), formerly of Jacksonville, was the first African American to become a member of the Jacksonville Bar Association. Johnson also served as chair of the Florida Board of Bar Examiners and was instrumental during the Consolidation of Jacksonville through his service on the Local Government Study Commission as Secretary. Johnson was committed to fighting inequality and segregation throughout his life and distinguished himself by representing many civil rights activists including Dr. Martin Luther King, Jr. and Ambassador Young.

Rutledge Henry Pearson (1929-1967), formerly of Jacksonville, was an American history teacher, civil rights leader, and human rights activist who focused on empowering his students to become involved in the civil rights movement and promote nonviolence. In 1961, he was elected President of the Jacksonville Branch of the NAACP and later elected President of the Florida State Conference of the NAACP.