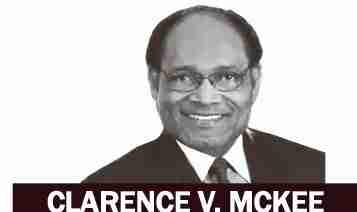 No, these are not real headlines, but they probably would have been if Donald Trump or Ted Cruz had participated in a comedy skit where the crude racial term “CP time” was used.

CP time is a reference to the racial stereo- type “colored people’s time” that blacks are always late. Often used by blacks in private, it, like the “N” word, is not acceptable for whites —no matter how liberal!

To put it in context, Clinton paid a visit to an annual black-tie event in New York that brings together the city’s press corps and political elite. Onstage with Mayor Bill de Blasio, she said that it was about time he endorsed her and asked why it took so long. His response: “Sorry, Hillary, I was running on CP time.”

De Blasio probably felt that because he has a black wife and biracial child he is an expert in racial sensitivities. Apparently his racial sensitivities regarding his son’s possible encounters with police do not extend to using racial stereotypical jokes.

But both he and Clinton should have known better.

This was a skit — not an off-the cuff remark — it was planned and hence both were aware of the context. That shows how insensitive Clinton and de Blasio, and their staffs, were regarding the negative racial connotations and implications of the statement. Or, maybe they felt “entitled” because they were liberals.

But, why should we be upset. After all, the White House has defended them. White House press secretary Josh Earnest said: “Mayor de Blasio and Secretary Clinton have, over the course of demonstrated a genuine commitment to the pursuit of equality and justice and civil rights.”

Would the White House have had the same comment if Trump or Ted Cruz participated in such a skit where such a misguided racial joke was used? Definitely not. Calling GOP candidates insensitive on race as mentioned above would have been the mildest response.

This is a good example of the hypocrisy and double standards by political leaders that has made Americans so skeptical and distrusting of politicians.

When a Sanders surrogate used a vulgar sexist term at a rally, Clinton demanded and received an apology from Sanders who said that the comment was “inappropriate and insensitive.”

There were no similar demands for an apology by Sanders, Sharpton or civil rights groups saying that Clinton and de Blasio’s racist humor was “inappropriate and insensitive.” Why not?

Because it only related to blacks and Clinton and de Blasio are white Democrat liberals who, as usual, get a pass from Democrats and much of the black leadership when it comes to racial comments and slurs.

To add insult to injury, not only did Sharpton say nothing about the slur, he had Clinton address his National Black Action group. Did she apologize before this black audience? Of course not. No need to. She knows that black voters are pretty much her’s for the asking.

She went on to give a speech laced with pandering racial platitudes attacking white privilege and racial disparities in wealth and crime statistics. She also said that whites should listen more to blacks.

The problem and shame is that apparently the black audience lapped up every word. No comments from Clinton on what she would do to stop the murder and shooting epidemic which has taken the lives of thousands of mostly black youths in mostly Democrat controlled cities.

After the Democratic primaries, blacks will be forgotten and the focus will be on white independents and Hispanics whose votes can’t be taken for granted.

Next post “American values” is a white nationalist code