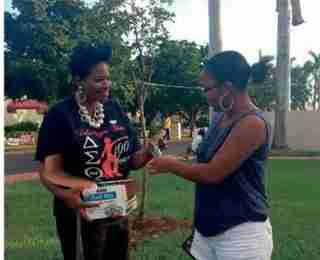 HALLANDALE BEACH, Fla – Community groups, elected officials and others were all doing their part to make sure Floridians got out the vote on Sunday, November 6, the last day of early voting. One such group was the South Broward Alumnae Chapter of Delta Sigma Theta (DST )Sorority , Inc., whose members were driving from poll to poll in Broward passing out snacks and water to those standing in line waiting to cast their ballots.

One DST member and precinct committee woman for Pembroke Pines out assisting voters was Linda M. Thigpen. She told the South Florida Times the Delta’s initiative is called Rolls to the Polls.

“We’re out here wanting to make sure people out here are comfortable so we are out here passing out snacks, giving water, giving people rides to the polls, providing fans to people who are waiting and more,” Thigpen said.

Thigpen also said she works with other groups like her church, Mount Olive in Ft. Lauderdale on other voting initiatives like Souls to the Polls because it is important to make sure people are informed about the issues.

“I disseminate educational information because regardless of who people vote for, there’s nothing like an educated voter,” Thigpen said.

One woman who received snacks from Thigpen, was 27-year-old Jerika Smith, who has a six-year-old son. She said she voted for Hillary Clinton because she believes Clinton can preserve President Barack Obama’s legacy and make a change. “I always vote. I believe every election is very important, especially for the youth; that’s where it counts and matters the most. That’s why I get out here and vote because I know my future depends on it and my son’s future depends on it,” Smith said.

Another Broward voter, Eleanor Graham of Hollywood, said she also voted for Clinton because she believes she is the best candidate for our country.

“I vote country, I don’t vote party. It is my democratic right to vote and I think that we all need to vote for the good of our country,” Graham said. “Hillary is a woman and it’s girl power to me. Hillary is smart and Hillary sees things the way I see them. She cares about the things that I care about.”

The snacks DST distributed were provided by Broward County’s Vice Mayor and District 8 Commissioner Barbara Sharief. According to the Florida Division of Elections, Florida led all states in early voting with 6.5 million votes cast by Sunday. Miami-Dade and Broward County boasted historic numbers.