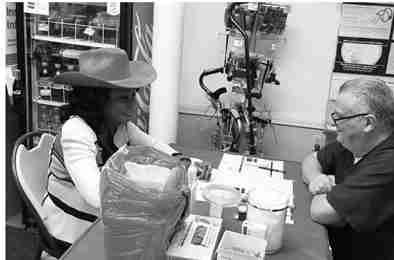 “Although the Affordable Care Act provides health coverage to millions of Americans who were previously uninsured, many people remain uncovered,” said Congresswoman Wilson. “I commend companies and organizations like CVS who promote the importance of preventive care as a way to keep more Americans healthy and enjoying life. I was honored to participate in this event to raise awareness about living a healthier lifestyle.”

Throughout her career, Congresswoman Wilson has supported initiatives that offer preventive health measures for uninsured and underinsured individuals like Project Health, which has provided more than $112 million in free health care services to nearly 872,000 people since its inception in 2006.

The event Congresswoman Wilson attended is one of 72 free health screenings at select Miami area CVS pharmacies. Over the past four months, more than 500 Project Health events have taken place in 10 markets across America with large African American and Hispanic populations. The screenings have uncovered many treatable conditions such as high blood pressure and diabetes, which demonstrates the continuing need for these critical services.

“Despite the increased number of Americans who have become insured over the past five years, there are still barriers to quality care, such as cost and access, for many patients,” said Troyen A. Brennan, M.D., M.P.H., Chief Medical Officer of CVS Health. “Project Health is part of CVS Health’s commitment to improving access to quality care by identifying health concerns and risk factors for participants who may not have otherwise sought preventative care.”

Congresswoman Wilson recently partnered with local, state and federal elected officials to ensure that pregnant women and women thinking of becoming pregnant were informed about ways to protect themselves from the Zika virus, which had its first local transmissions in Congresswoman Wilson’s district.