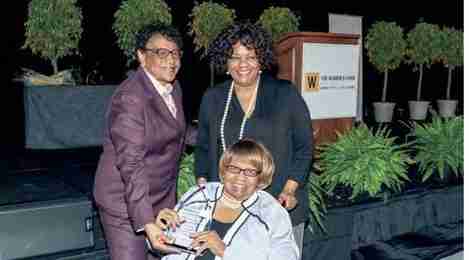 MIAMI – The ballroom at the Hilton Miami Downtown was full of Miami-Dade’s “who’s who,” for the Women’s Fund Miami-Dade’s Power of the Purse 2018 and 25th Anniversary celebration. Nearly 900 philanthropists, corporations, non-profits, community leaders, elected officials and community members came together on April 27 for one of the largest gatherings focused on improving the lives of women and girls in the county.

The organization launched its new rallying call “WOMEN STRONG WORLD STRONG” to drive the organization into the next 25 years, and to celebrate the past 25 years of engaging the community and providing more than $4 million to almost 500 nonprofit grantees serving over 75,000 women and girls in Miami-Dade County.

“We are more than a community, we are a movement, and together … we will overcome challenges to create a world where power and possibility are not limited by gender,” said Kathy Andersen, Women’s Fund executive director.

The organization announced The Women’s Fund Impact Awards that will invest in local non-profits and programs in its four pillars of economic security, leadership, health and well-being, and freedom from violence. Full details of how non-profits can gain funding through the awards will be announced later in the year.

A new web site and “Take Action Now” technology platform was launched that allows anyone to take action on critical issues to advance the status of women and girls in just a few moments on a mobile device or computer. During the event, attendees received a simple text message that enabled everyone to take immediate action to help end the trauma of human trafficking victim depositions in Florida.

The event ended with a call to action for supporters to contribute to the advocacy and impact initiatives of The Women’s Fund Miami-Dade in order to affect critical issues in our community, highlighting that as a WOMEN STRONG WORLD STRONG community, we don’t accept: • One in five women in Miami-Dade County lives in poverty.

• One in three girls are afraid to lead, or

• Women and families still do not have adequate and affordable access to health services.