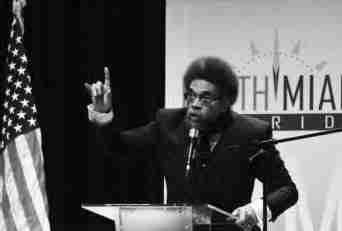 Cornel West hit the stage at North Miami Senior High School to a standing ovation and a thunderous round of applause. Attendees were on their feet to welcome the prolific thought leader to the stage on Friday Feb. 3.

West kicked off Black History month for the city of North Miami by giving a lecture on the crisis in black education to students, the school’s principal, Daryl Branton, community leaders, school board members, and elected officials. Mayor Smith Joseph introduced West and from there on you could hear an echo of “amens” throughout his lecture.

“What is wonderful about the younger generation with the movement for Black Lives Matter ….

it is concerned about…being committed to education in its deeper sense. There is a marvelous, spiritual, and moral awakening among the young folk. We haven’t seen that since the 1960s,” West said.

He went on to add that as it relates to the crisis in Black education, “The worst thing that could ever happen in an educational system is that you end up with producing some smart folk who are adjusted to injustice.”