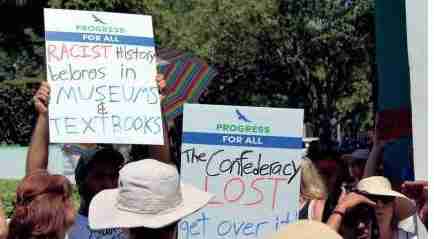 HOLLYWOOD, Fla. – As the nationwide debate surrounding Confederate memorials continues to intensify, one South Florida community decided to take the first step towards renaming streets that are considered offensive by some.

Last week, the Hollywood City Commission voted 5 to 1 to remove the names of Gen. Robert E. Lee, Nathan Bedford Forrest and John Bell Hood from street signs located in the city’s predominately black Liberia neighborhood, with nearly 200 supporters and opponents in attendance eager to voice their opinions and concerns.

U.S. Rep. Debbie Wasserman Schultz, who addressed commissioners during the meeting before the resolution was passed, shared her support for changing the names of the streets and urged the elected body to be on the right side of history.

“Replacing these street names won’t come close to addressing the issues of systematic racism and intolerance that still plague our society, but it is a vital and necessary step in the fight against these repulsive prejudices,” said Wasserman Schultz.“Confederate generals should be studied in textbooks and museums, as we teach future generations the importance of making a more perfect union, but they should not be honored on our streets or celebrated in our monuments.”

The decision by the Hollywood City Commission comes as other communities around the nation continue to hear from those who support and oppose removing Confederate memorials from public spaces.

Since the 2015 church shooting in Charleston, S.C., and last month’s deadly violence that erupted in Charlottesville, Va., cities like Baltimore, New Orleans and even as far west as San Diego have removed Confederate memorials, with many elected officials citing concerns for public safety and a nontolerance for symbols of hatred, racism and bigotry.

Although many blacks throughout South Florida have expressed their support for the removal of all public statues and monuments symbolizing the Confederacy, some say that having the memorials removed is like trying to hide a part of history that should not be forgotten.

“These monuments have been around for decades and mean a great deal to some people, and regardless if you disagree with their position, they should not have to come down,” said a Fort Lauderdale resident who identified himself as Winston. “This ongoing debate has caused much divisiveness over the years and is doing nothing to help improve race relations. If anything, it’s making matters much worse.”

After the Civil War and throughout the twentieth century, South Florida experienced several highprofile events of racial discrimination and violence that had an impact on the way current conditions are being viewed well after the abolishment of the Jim Crow South.

In May 1945, a group of black leaders and NAACP activists staged a wade-in at Baker’s Haulover Beach to protest against Dade County’s decision to make all of its beaches accessible to “whites only.”

The demonstration led to the establishment of “Virginia Beach, a Dade County Park for the exclusive use of Negroes,” in August of that same year.

In 1951, a series of damaged bombings buildings in Miami’s Carver Village in an effort to intimidate blacks and keep them out of the housing complex.

The violence eventually spread into nearby Jewish and Catholic communities, which led to a united coalition to help combat hate groups, including the Ku Klux Klan, commonly known as the KKK.

Dr. Kitty Oliver, Ph.D., an oral historian and former professor at Florida Atlantic University based in Boca Raton, Fla., said that although South Florida is very culturally and racially diverse – unlike some places throughout the nation – historical events like these have led to an increase of sensitivity that Confederate monuments bring to people of color.

“Sometimes, the subject of race can be a tough topic to tackle,” said Oliver. “Existing symbols of the Confederacy are an obvious salute to the people who support what they stand for, but as others become more aware of the injustice and inequality that is still seen in some communities, it will create more room for dialogue that will hopefully bring individuals from all parts of society together.”