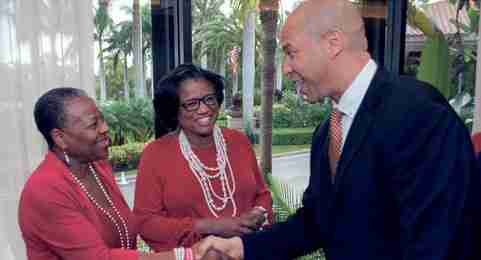 PALM BEACH GARDENS, Fla. United States Senator Cory Booker of New Jersey’s incredible journey includes being a stand-out athlete and a graduate of Stanford, Oxford and Yale Law School. And after earning the prestigious degrees, he returned to the inner city in Newark to live in a low-income neighborhood infested with drug dealing and street crime where he was the victim of burglary.

The former Mayor of Newark still lives in its inner city. He says he moved there to make a difference.

A prolific speaker, Booker knew just how to bond with the ladies of Delta Sigma Theta Sorority, Inc. as they converged on Palm Beach last weekend for their Florida and Bahamas Cluster.

My mom is a Delta; my aunt and my cousins are all Deltas!” he told the ladies. I feel like I’m with family!” he said on the last day of the group’s multi-day gathering at the PGA National Resort in Palm Beach Gardens.

In a brief interview with the South Florida Times prior to his speech Sunday morning, Booker said he doesn’t know yet if he’s running for president in 2020. But he didn’t rule it out. “I’m praying on it,” he said. “God works in mysterious ways.”

Although he’s not ruling anything out, and is flattered that people want him to run, Booker said he’s concentrating on reelection to the Senate.

Many would say the confident, charismatic Booker sounded presidential speaking to the Deltas.

“We need some change!” he said. “We still have some challenges with economic justice. We also know there’s a wage gap. And time and time again we see gun violence. I am telling you the problem we have is inaction. It’s time to light a candle.”

And sounding like a preacher, he spoke of the power of faith. “If America hasn’t broken your heart, you don’t love her enough. We gotta stay faithful. We’ve come this far by faith,” he said. “But we have to remember that faith without works is dead. We still have to love our enemy; heal some folk.”

Booker never mentioned President Donald Trump by name, instead, he asserted, “We have to be proactive and put faith in ourselves regardless of our President.”

Also in attendance was Florida Senator Bill Nelson, who introduced Booker to the Delta crowd. The two senators are traveling the state of Florida together stomping for Nelson, who will face Republican Gov. Rick Scott in November.

Patricia Taylor, South Florida State Coordinator for the Deltas organization, introduced Nelson as a friend of the group; touting his success with securing funding for Historically Black Colleges and Universities. Nelson’s regional director, Willowstine Lawson, is also a member of the sorority. Through her, he says he knows all things Delta Sigma Theta.

Booker said he thinks highly of Nelson. “I love Bill Nelson. I will walk through fire for this man. He is a united force, and he has shown me that character matters.” Both men were bombarded with well-wishers as they made their way through the crowd, stopping and posing for selfies with sorority members.

Sharon Wood, President of the West Palm Beach Alumnae Chapter of the Deltas said it was gratifying that the group was able to present Live Fresh, a non-profit organization that uses its mobile trailer to offer free showers to the homeless, with a $5,000 cash donation as well as hygiene products and toiletries that sorority members provided.

“I’m thrilled that we were able to be a blessing to a worthy local charity, which is what we’re all about!” said Wood.