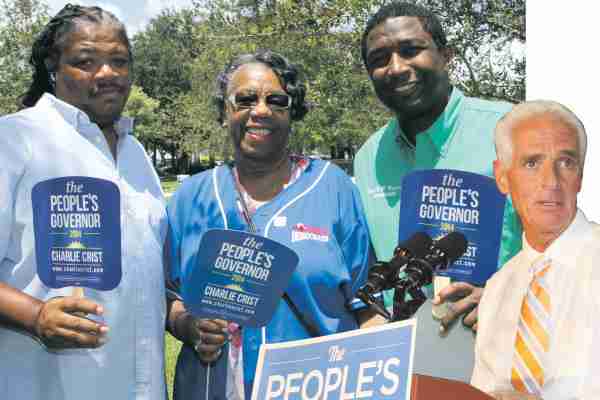 FORT LAUDERDALE — The messages emanating from Florida’s Democratic party are that voters should unite behind candidates on the slate and go to the polls for the General Election, Nov. 6.

The Democrats have a lot to deal with after the primary election, including low voter turnout – turnouts ranged from 10 to 14 percent in the tri-county area; the fact that the gubernatorial candidate who won in the primary election Aug. 26 is a Republican-turned Independent-turned Democrat; and the downturn in the economy and its impact on the State of Florida.

In days after Charlie Crist was elected to represent the Dems to face incumbent Gov. Rick Scott, the party has one focus, said various speakers at several events in Broward and Palm Beach. The Dems said they were up to the task of turning out the voters in November and putting Crist back in the governor’s mansion, as well as electing the other candidates on the ticket. Along with Crist, the democrats have Cabinet officers to get elected, including the chief financial officer, the agriculture commissioner and the attorney general.

Already there is a show of national support for Crist. Former President Bill Clinton is headed to Miami on Friday to stump at a Crist campaign rally at Miami’s J.W. Marriott Marquis.

Locally, two days after the primary, a strong message of unity was on display at the Democratic Unity Rally on Aug. 28 at the Urban League of Broward County in Fort Lauderdale.

In attendance were Crist and his primary opponent, former Sen. Nan Rich; Attorney General nominee George Sheldon and his primary opponent Perry Thurston; Congresswoman Debbie Wasserman-Schultz, and others, all with the same message – that Scott should not be granted a second term. The room was packed with about 100 to 150 supporters. A similar rally was held in Orlando earlier that day. Some of the same people at the Urban League event were also at the party at Pier 66 in Fort Lauderdale, the night Crist won the primary election.

Meanwhile, Scott on Friday outlined proposed tax cuts he pledges to make if re-elected and said he will continue to promote them during a two-week campaign tour, according to the Associated Press.

Scott said he will try to push through more than $1 billion in tax cuts over the next two years.

Many polls show both candidates in the race are about even. As of mid-August, Scott had out-raised Crist by about $1.5 million. Scott raised about $6.5 million and Crist about $5 million. Reports say that this governor’s race will cost about $60 million, all told.

Crist also has to win over passionate Rich supporters, some of whom are still struggling to deal with the fact that their candidate lost, and he has to reassure them that he also will support many of the issues she brought to focus while she was campaigning. What was stressed during the speeches is that 2014 must not be like 2010, when too many Democratic voters stayed home resulting in many Republicans and tea party candidates getting elected.

Many speakers also had warm praise for Crist’s primary opponent, Rich. Lt. Gov. candidate Annette Taddeo-Goldstein spoke about Rich’s heart and her passion to serve the people of Florida, and how Rich had run because she felt so strongly about beating Scott. Rich herself that day thanked people present for turning out to vote for her but stressed that people needed to vote for Crist in November.

Crist also praised Rich and encouraged everyone in the room to join forces. He said the last thing anyone in the room wanted was to wake up on the day after the election and read the headline “Scott re-elected.” Crist also said that many Republicans were telling people to not vote for anyone, neither Crist nor Scott, and just stay home.

Most attendees were pleased with what they heard that day and had warm praise for both Crist and Rich.

“I was very proud of all the democrats Uniting yesterday, and especially proud of Nan Rich,” said Joanne Goodwin, president of the North Broward Democratic Club. “I have worked on many a primary, sometimes on the losing side, but after the primary I have always worked hard to help elect the candidate of choice, and we as Democrats in Florida must all work together to make this a Scott Free Election! There is no room for bitterness! Nan is supporting Charlie Crist. I expect all of her previous supporters to do the same and to help GOTV [get out the vote] for Charlie Crist in November!”

Speaking at a different event in Palm Beach County, Taddeo-Goldstein said it was important for people to turn out in large numbers and vote in the 2014 mid-term election, so that Florida would not have a repeat of what happened in 2010 when the Democrats lost so many seats. Democrats don’t usually vote in mid-term elections, but they had to this time, she said. South Florida must deliver the votes in November, or the results would be disastrous.

“We have two options on November 4,” she said. “We go out to vote in large numbers and we have a headline that reads Charlie Crist and Annette Taddeo elected to the governor’s mansion, or Rick Scott gets re-elected. You don’t want that headline.”

Also speaking at an event in Palm Beach County, Palm Beach County Supervisor of Elections Susan Bucher said that voter turnout was important and that too many had stayed home during the primaries. This was despite the fact that more polling places were open and there were more opportunities to vote. Opening the door to voting was no good if people stayed home.

“We did a bad job in the primaries,” said Bucher. “If you want the policies bought and paid for in Tallahassee to continue, then you stay home.”