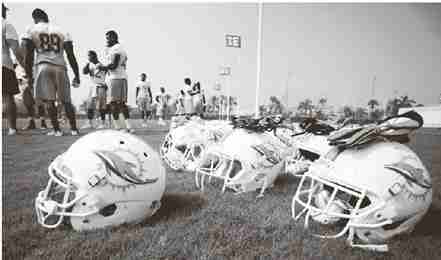 MIAMI – The Miami Dolphins believe they have the answers to help solve their draft deficiencies of recent years.

Miami is using a mobile app that assesses a prospect’s reaction to specific formations and plays. The test was administered on iPads at the NFL combine and during oneon-one visits with potential draft picks, and coach Adam Gase’s assistants tailored questions to fit the needs of the position they coach.

The test provides information the Dolphins don’t get elsewhere by measuring instincts, which can be difficult to quantify, executive vice president of football operations Mike Tannenbaum said.

“It has been very helpful in assessing aptitude,” Tannenbaum said. “It gives us insight on how people think, and how rapidly they make decisions.”

In other words: how well a player can predict what will happen next.

The app might not be a game changer, but perhaps it gives the Dolphins an edge. They could use one after a succession of spotty drafts and a seven-year playoff drought.

Known as siQ, the test was designed by Vasu Kulkarni, the founder of Krossover, a New York sports video analysis company. The NFL is relying more than ever on analytics, but the Dolphins are the only team using siQ, said Kulkarni, who introduced them to it last year.

“It’s one more data point,” Kulkarni said. “If you’re on the fence about a guy, or there are two guys with similar physical abilities, maybe this is one of those factors that can be a tiebreaker.”

The test grades a prospect’s response to situations by showing a formation or a play in progress. When the video freezes, the prospect is given multiple choices on how to respond.

“We’d say, is the quarterback going to hand off or throw? Is this man or zone defense?” Kulkarni said. The prospect is graded for the accuracy of his answer, and also on the speed of the response, which is tested in milliseconds.

“There were a lot of guys taking seven, eight, nine seconds to answer a question,” Kulkarni said. “In a game you don’t have that much time.”

When the Dolphins first used siQ at the 2015 NFL combine, the range of results was wide, with a handful of players standing out, Kulkarni said.

The Dolphins are understandably coy about the test, but first-year Miami coach Gase embraces such measurements. At 38, he’s the NFL’s youngest head coach and eager to take advantage of the team’s analytics department.

Kulkarni said he began contemplating a test of situational awareness a few years ago while watching football and other sports on TV. “I kept hearing color commentators saying, ‘That’s a high-IQ player,’” he recalled. “I said, `What does that mean?’”

Kulkarni developed his test and demon- strated it to Tannenbaum, who was immediately intrigued. So was the coaching staff. Position coaches submitted to Kulkarni questions they wanted to pose, and he integrated archival Dolphins video into the app.

Joe Philbin was then the head coach, and his assistants used the test at the 2015 com bine.

“Every coach from the Dolphins organization had an iPad and would hand it to prospects,” Kulkarni said. “The questions they had created, half I didn’t even understand. But these guys felt like if you can’t answer that question, you’re in for trouble in the NFL.”

The Dolphins have expanded their use of the app in the past year. “We think it’s a tool we can use long term,” Tannenbaum said.

Kulkarni said he can envision the test being used eventually as a training tool, allowing a team to spend less time on the practice field. He looks forward to judging the value of siQ in evaluating prospects.

“It will be interesting if we can gather several years’ worth of data and look over the career of a player, and show that the guys who did well on the test wound up having good careers in the NFL,” he said.

For the Dolphins, the bottom line regard- ing the test’s impact will be their won-loss data.