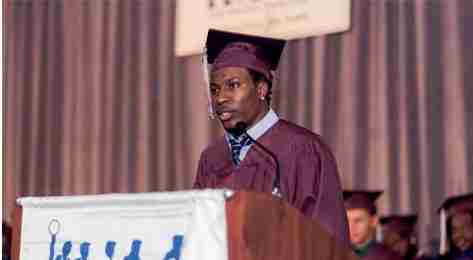 Youth Automotive Training Center graduate Jarvis Crawford shared how he came to the program and expressed his gratitude for the skills and opportunities he received that will allow him to make a good living and take care of his family.

DEERFIELD BEACH, Fla. – New skills and open doors were two of the biggest reasons friends and family of the 26 graduates of the Youth Automotive Training Center (YATC) gathered to celebrate last week.

A crowd of more than 350 family members, guests and community leaders were present to honor the noteworthy accomplishments of YATC’s 38th class.

“YATC is a place that teaches you skills you will have for life – like how to be a team player and a strong individual,” said graduate William Johnson, 18, who also received a special scholarship in recognition of his hard work. “I would like to thank Mr. Moran for his vision to create YATC. His legacy has opened new doors for me.”

Jim Moran’s vision for YATC’s nine-month program was based on the belief that many troubled youth in the community can transform their lives through intensive instruction and hands-on training in automotive theory and technical skills.

Equally valuable to the school’s mission is the emotional support provided by the caring staff – three who are YATC graduates themselves – and the educational and practical life skills they learn.

“Like the graduates who came before, you have overcome many obstacles and shown that you understand how to use determination and perseverance to achieve your goals,” said Terry Routley, YATC’s executive director, in a message to the Class of 2017.

“Mr. Moran established this program because he believed in giving people a second chance. Our hope is that YATC has provided that chance to get you on the right path toward a better future for you and your family.”

Guided by YATC staff and volunteer tutors from the community, six of this year’s graduates earned their GED. During the commencement ceremony, 17 graduates were awarded scholarships for continuing education, four that received special recognition for notable achievements.

Rossmeyer – founder of Bruce Rossmeyer’s Daytona Harley-Davidson and Daytona Toyota – was a devoted friend and generous supporter of YATC. In honor of her late husband, Sandy Rossmeyer, along with Jan Moran, presented Johnson with the award.

• Jarvis Crawford, 20 and Tyler Kirksey, 19, who were each presented with the Jump Start Award for excellence in automotive knowledge and repairs.

• Jesury Briones, 17, was honored with the Turnabout Award for making significant changes in all areas of his life.

During the ceremony, YATC recognized Gilbert and Vicki Hanks of Auto Carrier Express with the Jim Moran Award, which is presented annually to a person or group that has demonstrated extraordinary dedication to YATC’s program and students. The Hanks have given generously of their time and resources to the Training Center for 18 years.

Mona and Joe Aliseo were honored with the Super Big Heart Award for their committed volunteer work on behalf of YATC. The Aliseos have coordinated the annual Cool Wheels Car Show to benefit the school for six years, in addition to fundraising and serving on the Advisory Board for many years.

Hearing inspirational messages two graduates delivered to their classmates and attendees acknowledging the new path they are on thanks to YATC was a highlight of the evening.

Longtime YATC supporter and Miami Dolphins legend Dan Marino also spoke to the class, encouraging the graduates to cultivate and continue to build upon the positive relationships in their lives – such as the ones made through the YATC program.

Students are referred to the Youth Automotive Training Center in a variety of ways, including through the departments of Juvenile Justice and Children and Families, as well as by past YATC graduates, local clergy and word of mouth.

Many of these young people have experienced poverty, crime, abuse and addiction before reaching their teen years. There is no cost to the students who attend YATC as the program is funded solely by generous donors and the Jim Moran Classic Golf Tournament.