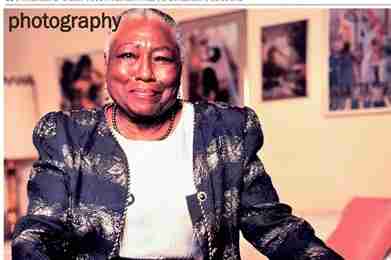 A new exhibit will showcase aspects of actress Esther Rolle’s life and career.

FORT LAUDERDALE, Fla. – One of America’s most iconic black actresses is being honored with a month-long exhibit at the Historic Ali Cultural Arts Center, located at 353 Martin Luther King Blvd. in Pompano Beach.

Kicking off yesterday and running through Dec. 2, “The Life of Esther Rolle Exhibit” examines the impact of the late award-winning actress, who was born, raised and is buried in Pompano Beach, Florida.

Presented by the Historic Ali Cultural Arts Center and Rock Road Restoration Historical Group, the special exhibit honors the anniversary of Rolle’s birth and death, both of which occurred in November.

She attended Yale University, won an Emmy Award and was the first woman to receive the NAACP Chairman’s Civil Rights Leadership Award.

“We are honored that Hazel Armbrister, a Pompano Beach historian, along with Ms. Rolle’s family members, Janice Rolle and Carter Allen, have coordinated this inspiring exhibit,” said Cherolyn Davis, director of programs and facilities. “Pompano Beach is very proud of all of the accomplishments Esther Rolle achieved during her illustrious career.”

Rolle still has a family home on NW 3rd Avenue in Pompano Beach that was renamed in her honor.

“We look forward to celebrating Esther Rolle’s legacy through this photographic exhibit and introducing her impact to a new generation,” continued Davis.

ROLLE’S LIFE AND CAREER AT A GLANCE

The daughter of Bahamian immigrants, Rolle was born in 1922 as the tenth of 18 children. an older sister, EstelleEevans, also an actress, memorably played Calpurnia in the film version of Harper Lee’s “To Kill a Mockingbird” (1962).

She married Oscar Robinson in 1955 and in the late 1950s she performed with Shogola Obola, a black dance troupe.

She eventually became one of the early members of the Negro Ensemble Company, which in 1969 performed at The Aldwych, “London in God is a (Guess What?)”

In 1964 she made her film debut in “Nothing But a Man” and her Broadway debut in James Baldwin’s “Blues for Mr. Charlie.” The following year she appeared in another Broadway play by Baldwin, “The Amen Corner.”

Other important stage appearances included Lady Macbeth in an off-Broadway version of “Macbeth” (1977), and as the matriarch Lena Younger in a tour of Lorraine Hansberry’s “A Raisin in the Sun” (1987).

Later film appearances included “Cleopatra Jones” (1973) and “Driving Miss Daisy” (1989). Her final film appearance was in “Down in the Delta,” directed by Maya Angelou.

In 1971, Rolle started her television career with regular appearances in the daytime soap “One Life to Live,” and the following year she made her first appearance in “Maude.”

Its spin-off, “Good Times,” was launched in 1974, and told the story of a struggling but loving family on Chicago’s South Side. It made a star out of Jimmie Walker, who played the older son JJ, and his trademark saying “Dyno-Mite!” became a national catchphrase.

Though the series was not shown in Britain, it was adapted by London Weekend Television in 1976 as “The Fosters,” starring Norman Beaton and Lenny Henry.

NBC’s “Summer of My German Soldier” (1978) was a made-for-television movie set in Georgia during one summer of the Second World War. It followed the bittersweet romance between a teenage Jewish girl (Kristy McNichol) and an escaped Nazi prisoner of war (Bruce Davison). Rolle’s portrayal of Ruth, the proud and defiant domestic who protects the teenager, earned her an Emmy award as Best Supporting Actress.

She followed this with another memorable performance as the strong grandmother in “I know Why the Caged Bird Sings” (1979). This was CBS’ made-for-television movie version of Maya Angelou’s eloquent memoir of her days as a gifted youngster growing up in the South during the Depression.

Beginning in the 1970s, Rolle made numerous guest appearances in top-rated television series including “The Incredible Hulk” (1979), “Love Boat” (1983) and “Murder She Wrote” (1985). In 1981 she played a leading role in NBC’s “Momma the Detective,” a pilot for a crime drama series that never materialized, in which she was cast as a housekeeper with an uncanny knack for solving crimes.

In 1989, Rolle appeared in a television version of “A Raisin in the Sun” and in 1990 she became the first woman to receive the NAACP’s Civil Rights Leadership Award for her work improving the image of blacks.

Rolle died in 1998 in Culver City, California from complications from diabetes. As a devout member of the African Methodist Episcopal Church (AME), Rolle requested her funeral be held at Bethel AME, so her body was flown back to Pompano Beach, Florida to be buried.

Next post Drake did not submit latest album to the Grammys