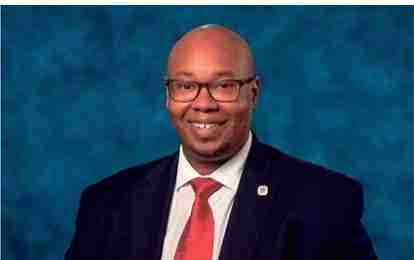 Donald Fennoy was recently selected as Palm Beach County’s first African American school superintendent. Fennoy, 41, a Florida A&M University alumnus, says the job wasn’t on his “radar” but he is excited to serve the community in this new capacity.

The district is the 11th-largest in the country with a reported 183,000 students, a $2.9 billion budget and 22,000 employees. It’s the largest employer in Palm Beach County.

But Fennoy minimized the significance of the achievement, preferring to stress his support for all students, regardless of race, creed or nationality.

“I don’t lead from the idea of my race. I want to see amazing educational opportunities for all kids,” he told the Sun Sentinel.

The school board chairman, Chuck Shaw, said the board clearly made the right choice in selecting Fennoy, who was one of three finalists. Fennoy has been the district’s chief operating officer since May 2016. He currently supervises school police, transportation, food service, maintenance, planning, environmental services and business diversity programs.

The three finalists were all interviewed March 7, and the board made its choice a few hours later. “Our School District has made tremendous strides in the past three years, achieving historic graduation rates while narrowing the achievement gap,” said Shaw. “The Board is confident in Dr. Fennoy’s ability to continue that momentum, and build upon the important work mapped out in our District’s strategic plan.”

Fennoy was previously a senior area superintendent in Fulton County, Ga., schools, a high school principal in Charlotte, N.C., and a teacher and assistant principal in Orlando. He worked his way up from an elementary school teacher. Fennoy had been under the shadow of his mentor, Robert Avossa, for quite some time. Avossa, the outgoing superintendent, brought Fennoy here when he arrived from Atlanta several years ago. Avossa surprised everyone this year by announcing his retirement as the district’s superintendent at the end of this school year.

He will now work in the private sector.

And now Fennoy will step into his mentor’s shoes.

“This community is wonderful, I’ve had a great experience, I’ve learned a lot and the people that I’ve worked with are amazing,” Fennoy said after getting the good news about his selection. “I look forward to continuing our strategic plan and I’m excited about working with this team.

Everyone is so passionate about the kids in this District, and I am too. Schools are built for the purpose of educating our children and that’s our job, period.”

Fennoy’s current position oversees school safety, so he was asked his stance on safety following the massacre at Marjory Stoneman Douglas High in Parkland several weeks ago. “I think before Parkland, I think a lot of us were complacent,” he said, adding that his current role working with security and facility teams gives him a leg up in this area. He said it’s a difficult issue, but a personal one since he has children who are students in the district.

That is also one of the things the board members liked about Fennoy: he and his wife are parents of school-aged children in Palm Beach County, therefore, he “gets it,” said Shaw. “He understands what every parent goes through every single morning, all those challenges,” Shaw reiterated.

Fennoy says he is up to the challenge, even though this position was not immediately on his list of things to achieve. “So this was never on my radar,” Fennoy told the media at a news conference right after the vote was handed down.

Fennoy graduated from Florida Agricultural and Mechanical University in 1999 with a degree in Elementary Education. He earned a Master’s degree in Educational Leadership and Doctorate in Educational Leadership and Administration from the University of Central Florida. While serving as a high school principal in Charlotte-Mecklenburg Schools, the high school led by Fennoy received the National School Change Award. This honor is presented annually to six schools in the United States that have demonstrated the greatest academic turnaround in a two-year period. Fennoy then moved to Baltimore in 2010, where he led the Maryland office of New Leaders for New Schools. He also served as a Senior Area Superintendent for the Fulton County School System in Atlanta for four years before becoming Chief Operating Officer of the Palm Beach County School District in May 2016. Fennoy’s new salary will be between $250,000 and $300,000 and will be finalized this week.

He and his wife Kendra are the parents of two children.