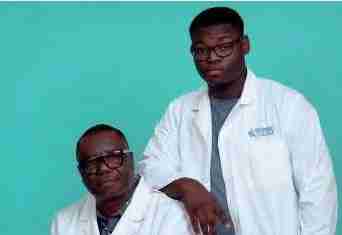 Francis Fagunleka (left) and his son Samson Fagunleka will both graduate from Broward College on May 9.

FT. LAUDERDALE, Fla. – Not many successful businessmen would uproot their families from their native countries in search of a stellar collegiate experience, but that is exactly what Francis Fagunleka did.

His risk paid off. The ambitious father of three will graduate from Broward College, along with his 21 year-old son Samson, on May 9. They will both receive Associate of Arts degrees and go on to attend Nova Southeastern University to pursue bachelor degrees in Nursing.

According to Francis, it is a day he has prayed for.

“I was denied when I was young of education. … I had a terrible experience from my background and I’ve been praying that if God could give me the opportunity to go back to school, God so help me,” Francis said.

In 2011, Francis moved his family from Nigeria to South Florida in search of a better life. Though the 52-year-old said he had many opportunities at home, including the chance to be a governor, he felt he couldn’t reach his full potential without getting a higher education.

“When I was in Nigeria I did several businesses. I had several opportunities, but I found out there’s no opportunity someone will have in life without education,” Francis said. “It’s not good. Even though I have the experience, I have all the potential, but I didn’t have the certificate to show.”

It was the first time Francis had been in a classroom since 1985, but the father and son duo said being in school together helped them both tremendously because they were able to motivate and encourage each other.

“It’s a glorious thing. It’s something I’ve been hoping to happen. Then for me to graduate with my son, I see it as a motivation to all my children, most especially my son because it will tell him and others that it’s never too late. I’m so happy,” Francis said.

“I feel a lot motivated because I’m graduating with my father,” Samson added. “He gives me advice and anything that I need and also he helps me out a lot with the mistakes (I made) in all the subjects because I wasn’t really good at math.”

According to Francis, he and his son took about six classes together including chemistry, sociology and anatomy. Though he initially planned on majoring in international business, Francis said studying America’s economy as it related to immigrants caused him to change his mind.

“When I studied the situation in this country, I found out if I’m in the medical line, I’ll have better opportunities because of my accent,” Francis said. “When you come from other countries and you are in medical line, you get better opportunities for better jobs. I found out that it’s not easy, but it’s possible for me to go for nursing,” Francis said.

Samson, who said he struggled with learning English at first, was very grateful for his father’s presence.

“I felt out of place sometimes, (but) we spoke our own language a lot at home,” Samson said. Francis also admitted that the process was not easy for him.

“I never used a laptop or computer in my life, so to learn all those things, how to submit my assignments … but I kept on going,” Francis said. “Sometimes the students they laughed at me and did so many bad things … but I never looked back because my intention was for me to have my degree so I focused very seriously.”

As a result of that focus Francis has been on the Dean’s List, Presidential List, and received several scholarships and awards from Broward College, He is also a math tutor at the school.

“Today the math department employs me as a math tutor at the lab … The students that were mean, today I’m one of their tutors,” Francis said.

Francis’ commitment to education for his family is also evident with his 18-year-old daughter Clare, who is also attending Broward College in a dual enrollment program. She will go on to Florida Atlantic University (FAU) on a scholarship after she graduates from high school.

Francis’ 91-year-old father and 78-year-old mother will get on a plane and travel from Nigeria for the first time in their lives to witness their son and grandson march across the stage.

Francis’ wife and four-year-old son Solomon will also attend he and Samson’s graduation. It falls on her birthday.

“This is a divine day for us. We are celebrating a lot of things,” Francis said.

“I’m feeling grateful, joyful that they came to celebrate my dad’s and my success,” Samson said.