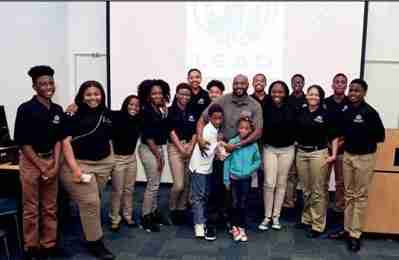 Marco Mall, creative director & producer at Florida Film House(FFH) shared his formula for success with LEAD Nation Fellows at Broward College to close out National Mentoring Month. With fifteen years in the industry, Mall shared a candid recap of his journey into being a pioneer entertainment entrepreneur.

The theme for the LEAD Fellows workshop was leadership, entrepreneurship and teamwork. Group and individual exercises were done by co-founder of LEAD Nation, State Representative Shevrin Jones.

Mall has established vertically integrated companies in entertainment, marketing, and branding from restaurateur and club ownership, to film and music management.

In 2004, Mall created JamTV, a music entertainment TV show, which ran on UPN and CW for three consecutive years in 39 counties, with interviews and guest artists such as Neyo, Alicia Keys, DJ. Khalid and many more. In addition to the television show and promotion company, Mall owned several different businesses, including a recording studio, a record store, a full sound production company, club etc. He was also a tour supervisor and manager at T-Pain’s Nappy Boy Records.

Mall is currently a co- founder of Florida Film House, one of the leading full service production companies in South Florida.