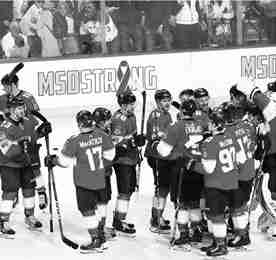 SUNRISE, Feb. 22, 2018 – It was supposed to be a Thursday evening of reflection and celebration. A look at the life of a man who, despite all odds, made his way to the ice rink to play one of the most segregated sports in the U.S.

But what it turned out to be was a moving memorial tribute to the young victims of the Marjory Stoneman Douglas school shooting that occurred a week earlier.

In what was hailed as its Inaugural Black Heritage Night – A Celebration With A Purpose, Black Broward Elected Officials (BBEO) planned to pay tribute to Willie O’Ree, a former Canadian ice hockey player known for being the first black player in the National Hockey League (NHL).

Many of Broward County’s black elected officials came out to enjoy an evening of networking, festivities and hockey. The pre-game event was held at the Florida Panthers against Washington Capitals Game at BB&T Arena. The BEO had also planned for a half-time tribute to Ree.

The emcee for the evening, community activist and Hot 105 Radio Host, Rodney Baltimore, kicked off the event with a moment of silence for the tragic school shooting in nearby Parkland, where 17 lives were lost.

Florida Panther owner and philanthropist, Vincent “Vinnie” Viola, spoke of the importance of and desire for a partnership between the African-American communities and the NHL, as well as encouraging youth to seek higher education. He also acknowledged Willie O’Ree as a pioneer in a sport where, traditionally, blacks are underserved.

County Court Judge Jackie Powell said that although she does not attend hockey games, the Black Heritage Event allowed her to take time to enjoy a fun-filled evening that she may have never experienced. Dale Holeness, Broward County Commissioner for District 9, acknowledged each of the elected officials in attendance.

The pre-game event concluded with a compelling statement by Joshua Simmons, teacher and candidate for Coral Springs City Commission, who spoke on the recent controversy over teachers having guns in the classroom. He stated his opposition to the idea led by President Trump and reiterated the importance and moral obligation we have as a society to keep our children safe from violence in the learning environment.

Simmons’ statements tied into the unexpected refocus of the evening to a tribute to the students, teachers and families of the Stoneman Douglas tragedy.

Although the inaugural Black Heritage Event was respectfully understated in light of the unexpected recognition of the shooting, an increase in the normal attendance of blacks at the Florida Panther game was noticeable. The percentage of black-to-white patrons is still a very disproportionate ratio but the event allowed the African-American community to experience and enjoy the game while celebrating its rich history.

The night ended in a 3-2 win for the Florida Panthers.