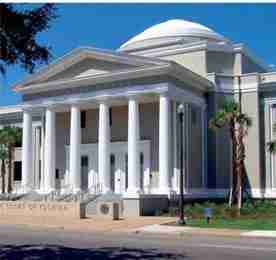 TALLAHASSEE, Fla. – Florida’s Supreme Court wrestled with whether an inmate sentenced to death under a system found to be unconstitutional should have his punishment reduced to life in prison, and the lives of nearly 400 other condemned prisoners may depend on the decision.

David Davis, the attorney for inmate Timothy Lee Hurst, argued for the lesser punishment Thursday after the U.S. Supreme Court ruled earlier this year that Florida’s death sentencing system gave too much deference to judges, not juries.

Hurst was convicted of the 1998 murder of his manager at a Pensacola Popeye’s restaurant. A jury voted 7-5 in the favor of death, and the judge agreed and imposed the sentence. “I represent Timothy Hurst. As for him, he should get a life sentence. I’m going to leave it to the Supreme Court and other lawyers to sort out how much retro-activity it gets,” Davis said. The Florida Supreme Court did not immediately rule, and will use the arguments to help decide whether to reduce Hurst’s sentences, and perhaps those of the state’s 389 death row inmates. Two executions have been halted since the Supreme Court’s ruling in January, and attorneys for those inmates have asked the court to impose life sentences for all inmates sentenced to death under the state’s old system.

Florida Assistant Attorney General Carine Mitz argued that Hurst should not receive a life sentence. She said the U.S. Supreme Court’s ruling didn’t declare the death penalty unconstitutional, just the sentencing process. She said if Hurst’s death sentence is tossed out, he should get a new penalty phase.

The arguments Thursday were the second round of oral arguments in Hurst’s case, an extremely rare move for the court that shows the gravity of its forthcoming decision, said University of Florida Levin College of Law professor Teresa Reid, a death penalty expert.

“If the court accepts (Hurst’s) interpretation of (Florida law), then Hurst and others on death row would have their cases remanded and life sentences imposed,” she said.

Since January’s U.S. Supreme Court ruling, Florida passed a new law that requires at least 10 of the 12 jurors to recommend execution. Under the new law, prosecutors must also explain to jurors why the death penalty is the appropriate punishment before a murder trial begins, and the jury has to decide unanimously if at least one “aggravating factors” justifies it.

Previous post Obama: Grads have a mandate to change America