For WPB couple, service is a lifestyle 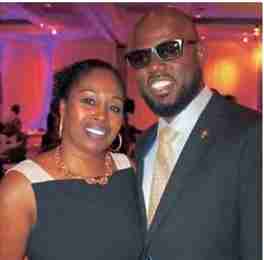 WEST PALM BEACH, Fla. – Rae Whitely and his wife Bethan are always fighting for justice for children, youth and those in lifestyle need. Many know that Rae put himself on the line when church musician Corey Jones was shot and killed by a police officer in the fall of 2015.

Whitely quickly became one of the faces of the Corey Jones campaign for justice, often appearing with the family and others seeking justice for the slain musician – and he is not through with that case yet.

Whitely is putting together a massive campaign to get the word out about the goodness of Corey Jones so that potential jurors will know all about the late musician’s impressive legacy.

But this weekend, Whitely and his wife are fighting for justice and humanity for the kids of South Florida.

On Saturday, June 3, the public will be able to support the couple’s nonprofit organization and salute those who embody the spirit of Children’s Oasis International, founded in 2008.

Whitely and his wife, Bethan, who was the visionary of Children’s Oasis, will host a banquet designed to pour back into those making a difference in the community. The group will honor Estella Pyfrom, proprietor of Estella’s Brilliant Bus, as its “Woman of the Year” and James Green, head of My Brother’s Keeper of Palm Beach County, the initiative started by former President Barack Obama, as its “Man of the Year.”

The “Organization of the Year” is the East Boynton Beach Wildcats youth organization, which assists over 400 kids in sports and recreation in Boynton Beach.

“Five years ago we decided to celebrate people who line up with our vision,” said Rae. “Estella Pyfrom’s organization speaks for itself. And James Green’s initiative is great. It’s truly enabling today’s youth to be tomorrow’s leaders. And the Boynton Beach Wildcats are an outstanding group, helping some 450 students in sports and recreation. We take a few hours to pour into these honorees and we hope the people who come out will support them. They deserve the support,” he said.

“We’re also giving out six scholarships this year. It’s a tug of war out there for kids today and they could easily take the wrong path. My goal is to help them take the right road when they’re at a crossroad,” said Bethan.

She was inspired to create Children’s Oasis International while she and Rae were on vacation in Jamaica almost a decade ago after encountering a needy young boy.

“There was this 8 to 10 year-old boy who was erasing his entire composition book so he could re-use it for the next year. I asked my husband how much would it be for us to send school supplies back to Jamaica. And that’s how we got started. I said, ‘You know, we could do this! We have kids here who could use help too!’ So for about a year, we sent supplies to Jamaica, and then we eventually started helping in our local community,” said Bethan.

“I get joy from it,” said Bethan. “So many kids want to do better, but they don’t have the tools. … We supply the tools for them to succeed.”

According to Rae, after the June 3 banquet, the organization will delve into its campaign to promote Corey Jones to the masses.

“The next couple of weeks after this event, we will create a narrative around Corey. Nobody is talking about how good a person Corey was. Our objective is to bring Corey to their minds before the trial of Nouman Raja in October.”

Raja was arrested and charged with manslaughter and attempted first degree murder in Jones’ death.

For more information or to purchase tickets, call Rae Whitely at 561-523-2286 or visit www.childrensoasisinternational.com.