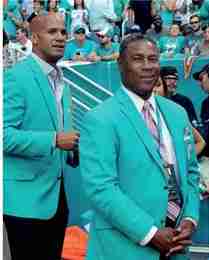 MIAMI – Say what you will about the Miami Dolphins on the field! (Although lately they’ve done South Florida proud in that area too!) But even more impressive have been the Dolphins’ alumni and their off the field efforts to make a difference in the South Florida community.

Recently, the Dolphins organization acknowledged numerous former players in a lavish ceremony for their outstanding charity work through their foundations and personal charities. Over 25 Dolphin alumni were honored during halftime of the Miami Dolphins vs. Buffalo Bills home game on October 23 for their valued contributions in South Florida. Together, their contributions have raised nearly half a billion dollars and contributed nearly 200,000 hours in service to causes that benefit the community.

Nat Moore, former Dolphin standout, and now Senior Vice President of Alumni & Special Projects, said recognizing the former Dolphins is the least they could do for all the work these men have displayed through their organizations in our area. “This year we salute them for what they’ve done off the field,” Moore said during an interview at the Alumni Weekend Celebrity Draw party held at the stadium, sponsored by TD Bank, which honored the men. “You want to have a great community,” said Moore. “And I think it’s safe to say we’ve all found our niche. We’re no longer playing, but we’re still here. We’ll always be a part of this community.” Moore’s foundation, The Nat Moore Foundation, was among those being hailed. The Nat Moore Foundation helps kids help themselves through scholarships and educational growth. Since 1998, the Nat Moore Foundation has distributed more than $2 million to various youth and social service organizations, helping over 100 South Florida high school graduates achieve their dreams of higher education as well as provide support services to hundreds of children and youth through academic, fitness and life-skills programs.

The men adorned their aqua blazers or hall of fame jackets and were escorted on the field during the halftime ceremony. They proudly accepted the honors for being leaders in supporting youth and other recipients through their charities.

Bobby Harden, a Dolphin player from 1990-1993, said it’s great to see his cohorts being honored. Harden, who was on the Alumni Advisory board previously, said it’s the right thing to do. “It’s great to see them recognized in this way. They deserve it,” he said.

The charities being recognized covered the gamut including education, inner city youth, science, math and technology, health and more.

Twan Russell, who played with the Dolphins from 2000-2002, said many of the guys retired in South Florida and made the area their home. They enjoy helping this community, he said. His foundation, the Russell Education Foundation inspires and equips underserved children and their families with the tools for continued success. The foundation’s after school programs exponentially improve student’s chances of graduating from high school, attending college and joining the work- force.

Fan favorite and former Dolphin sensation, Jason Taylor was honored for his foundation as well. The Jason Taylor Foundation supports and creates programs that facilitate the personal growth and empowerment of South Florida’s children in need by focusing on improved health care, education and quality of life.