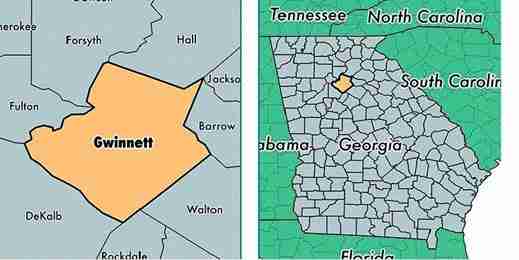 PHOTO COURTESY OF OF WORLDATLAS.COM

SOUTH FLORIDA – The Gwinnett County Police Department, located just northeast of Atlanta, Ga., is expanding its reach – all the way to South Florida.

The department is hiring more than 155 police officers, 65 of which will be added in 2018. To accomplish this goal, the police department will host a hiring event in Fort Lauderdale on March 3 and 4 at Nova Southeastern University’s Fort Lauderdale/Davie Campus, according to Gwinnett County Police Department Sgt. Jake Smith.

“It seemed a good place to hold one of our events,” said Smith in a telephone interview. “We have quite a few folks working at the department now that are from that area.”

It is not the first time the department has recruited outside of Georgia. In the past, it has also held recruitment sessions in upstate New York, said Sgt. Smith.

Participants attending the event will participate in an orientation session, physical fitness assessment, panel interview and a written psychological test.

Smith said candidates are not required to wear a suit for the interview, but there will be a facility to change into clothing for the physical assessment should they wish to. Participants can visit gwuinnettpolicejobs.com to pre-register and begin required paperwork. As of last week, some 75 people had pre-registered, said Sgt. Smith.

He said the police department‘s goal is to complete the hiring process in 90 days or less, “which is significantly faster than most police agencies,” he said. “Most applicants’

background investigation are completed well before the 90-day mark, and attendance at the hiring event will make the process even faster,” said Sgt. Smith.

Sgt. Smith noted that unlike many police departments across the country, the Gwinnett County Police Department does not have a cut-off age for applicants, which means retired officers or former military, as well as others, can apply for the force.

Pay for those who are successful in the hiring process begins at $38,642 or $40,960 for those with a bachelor’s degree, said Sgt. Smith. Police officer trainees will receive a non-enforcement assignment within the department until the next academy begins, he said, and those with previous law enforcement experience may be eligible for a lateral transfer program. He added that while all out-of-state recruits must attend the full police academy, they’ll start at a higher salary based on years of experience.

Sgt. Smith said that following training during which trainees receive full payment – officers who successfully complete the academy and training will be promoted to police officer senior on their one-year anniversary. “After two years in the rank of police officer senior, officers are eligible for a non-competitive promotion to master police officer with completion of certain training requirements,” said Sgt. Smith. “Base salary is increased to $49,528 at that point or $52,000 with a four-year college degree.”

Additionally, [the department] offers a relocation reimbursement of up to $2,000 for qualified expenses, Sgt. Smith added.

Gwinnett County is part of the AtlantaSandy Springs-Roswell, Georgia Statistical Metropolitan Area and is named for Button Gwinnett, one of the three Georgia signers of the Declaration of Independence, according to the government of Georgia. The county seat is Lawrenceville, with a population of 239,302.

According to Georgia government statistics, Gwinnett County’s total population is 789,499 and is 436 square miles. The median household income is $60,445 and the median home value is $171,300.

Home to the Atlanta Institute of Music, the county is close to both DeKalb and Fulton counties, the latter of which is home to Atlanta.