Hallandale High one of 50 schools to receive NBC grant 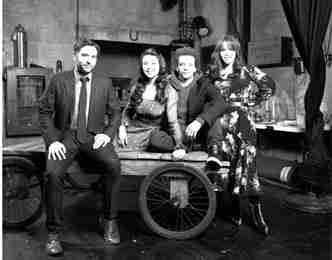 UNIVERSAL CITY, Calif. – Hallandale High School is one of fifty high schools that have risen above 1,000 applicants to claim NBC¹s R.I.S.E. America grants. The program inspired by the network¹s upcoming drama “Rise” about a high school theatre department and its effects on a small town is awarding half million dollars to high school theatre programs across the country.

Through R.I.S.E. (Recognizing and Inspiring Student Expression) America, NBC has awarded each of the 50 winning schools with a $10,000 grant that will cover the critical needs of their theatre programs ranging from production expenses to technical equipment and master classes. NBC is facilitating the program in partnership with the Education Theatre Foundation (ETF), a nonprofit organization dedicated to shaping lives through theatre education.

“It is a dream come true for me that ‘Rise’ will have a genuine impact on 50 high school drama programs throughout the country,² said Jason Katims, the show¹s creator and executive producer. ³It has never been clearer that the future of our country rests on the shoulders of the next generation of young leaders. I am excited about the notion that the R.I.S.E. America grants will help support, inspire and nurture creative young minds throughout the country, especially at a time when arts in education is under-valued and underfunded. I am blown away by the generosity of NBC and Bob Greenblatt, along with the efforts of the Educational Theatre Foundation, who have made this all possible.

“Seeing the need school-by-school was both inspiring and a wake-up call,” said Julie Cohen Theobald, President of the Educational Theatre Foundation. “The way these dedicated educators are impacting kids’ lives, against the odds and without the necessary resources, is heroic. Every school was deserving, and their stories reinforce the need to continue this momentum until every school in America has a well-funded theatre program.”

To qualify for the grant, high schools were required to have an existing theatre program or a champion of theatre arts in their teaching staff in cases where a school¹s theatre program was cut because of budget constraints.

Each school submitted a video celebrating their theatre program and a 500-word essay explaining why their school should be awarded the grant and how they will use the $10,000 should they win. They also submitted a letter of recommendation from a school principal or administrator endorsing the application.

Next post Broward teacher featured at South by Southwest conference