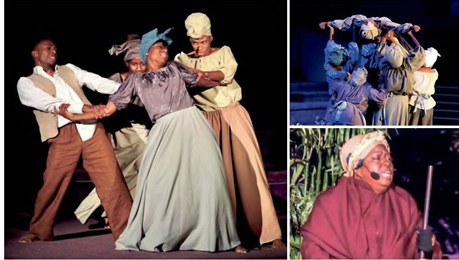 WEST PALM BEACH, Fla. – When artistic director Raymond Young of Miami realized his desire to bring Harriet Tubman to the stage, he knew exactly who he wanted to play the awe-inspiring history maker. Established actor and playwright Regina Hodges was his one and only choice. The Daytona Beach native had the grit and fortitude to bring Harriet Tubman to life, so he wasn’t taking no for an answer.

And so he got his wish: She said Yes!

“He said I was the first to pop into his mind!” said Hodges, who got the acting bug in the ’80s. “I didn’t think I would do the role justice so I was hesitant. I finally said yes!”

Hodges said she had to dig deep to bring the iconic woman to the stage.

“It was indeed a challenge playing a real life hero. I had to really dig deep. I had to do the leg work,” she said.

Young said he knew she would do it justice. “When God inspired me to do Harriet, I was absolutely sure she was the one who had the ability to bring out the true essence of this trailblazer,” he quipped.

And now the the thrilling stage play, “The Escape!! The Underground Railroad,” is coming to the Palm Beaches after having had two runs in Miami. It’ll hit the stage on Saturday, Oct. 19, 7 p.m.

The stage production had two successful runs in Miami earlier this year. Young said he couldn’t have asked for a better turnout.

Every year during Black History Month, his Dedications Dance Company puts on a prolific production highlighting the African-American experience. “This year I was inspired to do Harriet Tubman,” he said. “She’s an icon in American history.”

Neither Hodges nor Young are strangers to great works in the arts.

Young has been in dance since the age of 13. Just out of high school, he was among only six of 5,000 chosen to perform in Las Vegas onstage with the great Sigfried and Roy. Among those in the audience who watched him perform were the late, great Michael Jackson, Celine Dion, Cher, Janet Jackson and many others.

Young also received a special invitation to perform before the Royal Family of Monaco in Monte Carlo. His Dedications Dance Company has shared the stage with the likes of Yolanda Adams, Donnie McClurkin, Richard Smallwood and many other noted gospel artists.

Some have called his liturgical troupe the Alvin Ailey dance group of gospel. He’s also won many commendations such as Choreographer of the Year and a Lifetime Achievement Award.

Hodges, meanwhile, made history prior to acting by becoming one of only two female African-Americans ever enlisted in the United States Coast Guard after graduating high school. She got the acting bug in the 1980s, however, and has been a success ever since. She’s worked with celebrities such as Robert Townsend and has been featured on Family Feud with Steve Harvey. She and her husband have their own production company, D & R Productions, which is presenting the production, A Christmas to Remember on Dec. 21 at the Little Haiti Cultural Arts Center in Miami.

Hodges says audiences of all ages would love to see Harriet Tubman and would find it educational and inspiring. Young says God gave him a mandate years ago.

“Over 25 years ago, I was in pursuit of being a professional dancer, and God told me to give up my pursuit of becoming a star so that young people could be inspired,” he said. “That’s what we’re doing now.” Fifty dancers are also in the production, starting at age 3.