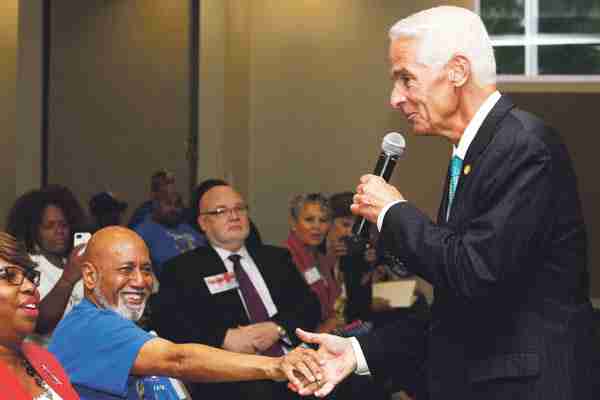 FORT LAUDERDALE — Incumbent U.S. Rep. Alcee Hastings says he will file a countersuit against Speaker John Boehner if the Republican majority goes ahead with plans to sue President Barack Obama over his use of executive power.

A video of an irate Hastings chiding House Republicans for their vote to sue the president went viral and was seen as capturing the sentiment of those who see the threatened lawsuit as another GOP stunt to disparage the country’s first black chief executive.

Hastings is facing two opponents in the Democratic primary on Aug. 26. They are Jean Enright, a Palm Beach County Port Commissioner since 2004, and Jameel McCline, an entrepreneur, former boxer and ex-felon who spent most of his childhood in foster care.

The two challengers said they have nothing against Hastings but it is time for a change.

Enright said she would focus on job creation and economic development, especially in the most impoverished areas.

“I’m running for congress because … I feel that after a period of time we need a new voice. We need to change things up,” she said.

McCline promised to push for a higher minimum wage, funding for job training and spending on roads and bridges to boost employment.

“I fought for 18 years … all over the world. I’m a three-time champion. I became an entrepreneur and community advocate and I’ve been deeply involved in the issues that involve our young men because of a lot of the things that I went through as a young man,” McCline said.

Hastings, a former federal judge who was impeached and removed from office in what many at the time regarded as an act of injustice, emerged triumphant when he won a seat in Congress in 1993. He represented district 23 from 1993 until it changed to district 20 in 2013 as a result of redistricting.

At the forum, he touted his judicial and political experience, his success securing millions of dollars in earmarks for district 20 before earmarks were discontinued and his willingness to take on the GOP.

Addressing his opponents’ desire for change, Hastings said, “I’ve been a change agent. Let me make that clear.”

The winner will face Republican Jay Alan Bonner in the general election in the fall.

The gubernatorial segment of the forum was weakened with the absence of the incumbent, Republican Rick Scott.

One of Scott’s challengers Charlie Crist appeared briefly at the start of the forum and spoke to the audience but left before it was time for him to take the stage. His departure prompted his challenger Nan Rich to say, “I do wish that my Democratic opponent were here. He did come in for 15 minutes. Unfortunately, we have not had an opportunity to debate the issues.”

Rich, a former state representative, sent out a tweet that mocked Crist’s brief appearance, saying, in part, that he “stopped by & pandered to the audience.”

Also present was Republican candidate Elizabeth Cuervas-Neunder. She raised a flip-flop shoe as of a symbol of Crist’s change in political affiliation from Republican to Independent and now a Democrat.

Also at the forum, State Sen. Chris Smith called attention to a proposed amendment to the Florida Constitution that could result in Scott’s stacking the Supreme Court even if he loses his re-election bid.

Smith, a Fort Lauderdale Democrat, said Amendment 3 seeks to allow the outgoing governor to name the successors to the three justices who must retire because of mandatory age requirements.

Calling the amendment a “power grab,” Smith said that its passage would allow Scott to name replacements for Justices R. Fred Lewis, Barbara Pariente and Peggy Quince – a black justice – who will be forced to leave the bench on Jan. 8, 2019.

The three are considered the “liberal” wing of the Supreme Court. Critics argue that the amendment is an attempt by Republicans to pack the court with conservative justices.