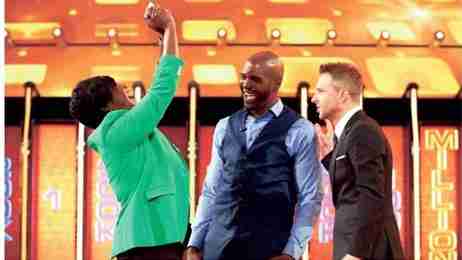 SUCCESS: Chris Bentley (center) owner of Live Fresh, the provider of showers for the homeless, and his sister, Paris Bentley Calhoun celebrate winning over $100,000 on NBC’s game show “The Wall.”

WEST PALM BEACH, Fla. When Chris Bentley was in college in New York, he, like everyone else, couldn’t help but notice the massive homelessness problem all over the streets of the Big Apple.

Inspired by seeing so many people struggling and living on the streets, he decided to do something about it. He came back to Palm Beach County, his home, and vowed to help the cause.

He eventually created Live Fresh, a mobile trailer equipped with six shower stalls that moves from place to place enabling the homeless to take a clean shower and get free toiletries.

Bentley’s work was deemed so amazing that he caught the attention of NBC TV executives and their hit new game show, “The Wall,” which is executive produced by sports star LeBron James among others. The show, which debuted last December, has a history of inviting contestants who are good people doing great things.

They selected Bentley and his sister, Paris Bentley Calhoun, hoping to net them some funds for Live Fresh, Bentley’s nonprofit business. Their episode recently aired – netting them well over $100,000 in winnings, which Bentley plans to use to expand his organization.

It was a dream-come-true, and a huge blessing for Bentley, he pointed out, considering the extensive national publicity he received for his non-profit.

“We couldn’t have asked for better publicity – yet we walked away with additional funds too. You can’t pay for this kind of publicity, yet we got paid! It’s a tremendous blessing for us,” he exclaimed.

Bentley says he has been interviewed on national TV before for his organization, but he has never been on a TV or game show. “It was Paris’ first time in L.A. and it was my first time on an actual TV Show.

Yes, it was a once-in-a-lifetime experience!”

Besides the fact that it was a sheer fun, Bentley said it was amazing being a part of a show that celebrates the good in life.

“I think it’s awesome that he (LeBron James) has a show that highlights the best of humanity. It’s great that the show is focused on great people doing great things!”

His older sister Paris said she was surprised that Bentley chose her to be his partner on the show. Out of all of their siblings, she didn’t feel she was the best at trivia. But together they pulled it off.

“For some reason, he wanted me!” she said. “Our personalities are different, but we mesh! It was an experience of a lifetime, and a roller coaster,” she explained. “If you’ve ever seen the show you know that one minute you’re up and the next minute you’re down!”

At one point the two had possession of over a million dollars during the show, but things were up and down, and they said they feel blessed to walk away with the $140, 231 they won.

“Not in a million years would I ever have thought this would happen,” Paris said. “I couldn’t imagine walking away with that kind of money! It was crazy,” she said, laughing.

Bentley said he has been overwhelmed by all the love and support people from around the world have been showing them.

“So many people have been commending us for our mission. The reception we’ve received has been phenomenal. It’s been so much fun, but a learning experience too … and having the chance to showcase our charity on a national stage was priceless.”

Now that’s he’s done it and won big -would he be up to the challenge again or on a different game show? He says he would.

“Personality-wise I’m more of a behindthe scenes person. But the experience was so life-changing, I would do it again.”

Bentley said he owes such gratitude to the brass at NBC and The Wall.

“I would like to thank NBC, and the show’s creator, Andrew Glassman, as well as LeBron James and host Chris Hardwick — plus all the millions who saw the show and cheered us on.”

The show aired July 20 and there were watch parties across the county, state and nation to cheer them on.