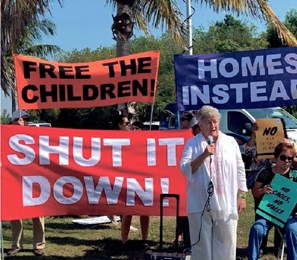 HOMESTEAD, Fla. – The children remaining at the Homestead Detention Camp, the largest such facility in the country which has housed about 14,300 immigrant children in total since March 2018, are no longer at the facility. The move allegedly because of a looming tropical storm threat and according to the federal government, they will not be back.

The Florida Immigrant Coalition, and partners like American Friends Service Committee and WeCount!, worked relentlessly organizing calling for transparency and accountability at this site, with the ultimate goal of shutting it down.

“Due to the efforts of so many good people and organizations, it seems that the Homestead Detention Camp for children is closing down. Relentless advocacy and organizing made sure we no longer had a detention camp in our community, but this isn’t over yet.

We need transparency on where these kids are being transferred, we need to make sure that the 17-year-olds aren’t sent to adult detention to await deportation, and we need to continue fighting to prevent anymore of these so called “temporary influx shelters” from opening elsewhere. The Florida Immigrant Coalition and partners will remain committed to this fight until all the children are free and reunited with their families and sponsors.” Thomas Kennedy, Political Director for the Florida Immigrant Coalition

Previous post CITY OF MIAMI BEACH IS VICTORIOUS AGAINST AIRBNB