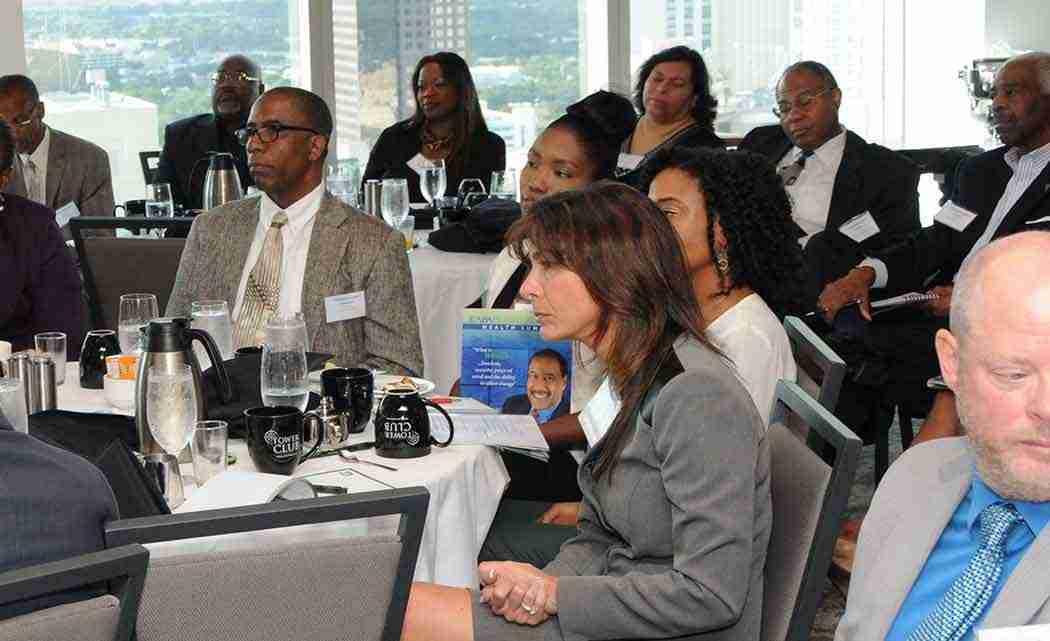 FORT LAUDERDALE, Fla. — Leading entrepreneurs and thought leaders in wealth-building delivered presentations, guidance and inspiration to an overflow audience of more than 140 entrepreneurs and professionals at the Tower Club in Fort Lauderdale for the ICABA®  Business Forum Wealth Summit.

Overlooking the city’s downtown and Atlantic Ocean, attendees heard from one of the nation’s most successful entrepreneurs, Ulysses “Junior” Bridgeman, whose company has revenues in excess of $500 million annually, and owns over 400 restaurants nationwide.

Renowned thought leader on success and wealth, Dennis Kimbro gave the opening keynote to kick-off the Summit. Throughout the day, attendees connected with each other and shared information and opportunities to grow their businesses.

The summit  began with a call to focus on wealth building and ended with a declaration making that promise a reality. During the event, Jerome Hutchinson, the founder and chief executive officer of ICABA announced its expansion plans to become a global organization and to take the Wealth Summit on a national tour with Kimbro as its headliner.

Over the past six years, ICABA (International Career and Business Alliance, Inc.) has built a local network of accomplished professionals and entrepreneurs of color and provided them an array of opportunities from business development and networking events to social networking and professional recognition.

Moving forward, Hutchinson said, the organization is launching a new online community that will connect ICABA members to each other, bankers, investors and venture capitalists to help create new businesses and expand existing ones. Members will also have access to corporate job postings and other employment opportunities to help those interested in starting a business gain the necessary experience for future success.

“This is not a one-off event,” Hutchinson told his audience. “This is the beginning of a wealth building movement.”

The objective of the Summit was to shift the focus in the black community from income to building wealth  That goal was accomplished, attendees say, through rigorous discussions of leaders and experts from various sectors such as technology, real estate, franchising and public/private partnerships.

“For companies like mine, this has been a great opportunity,” said Darrel Branch a local investor and CEO of The Players Roundtable who addressed the impact of the economic downturn on his company during a panel discussion on securing capital to build wealth.

“Wealthy individuals with strong portfolios in traditional investments began to diversify their portfolios,” Branch said. “So, the marketplace for us has been great because there were some smart people laid off in 2008 who came up with some good ideas. That changed the game.”

The speakers provided the right mix of advice and inspiration. Brenda Rivers, a Miami entrepreneur who owns multiple restaurant franchises, had thought about retiring after more than 30 years in the food service industry.  That was before she heard Bridgeman. Now she’s thinking about future opportunities.

“I’m curious how he manages 400 operations,” Rivers said. “That’s probably why I haven’t gone much further because of the need for an organization to grow. I think the most important thing to get out of this conference is how to build a strategic plan with partners to grow anything.”

Fortunately, the wealth-building message resonated with a new generation, too.

“I learned that putting together the right team is the most important part, and the company will need someone who knows something about finances,” said Javalin Lovett, an accounting major and senior at Florida Memorial University who is a business partner with another FMU senior in launching a new company to promote independent artists. “If there’s a miscue in the finances, the whole business can go under.”

Aundra Smith, Lovett’s business partner, also picked up some invaluable advice about building productive business relationships and staying away from the naysayers.

“I’ve come across a lot of doubters,” Smith said. “My vision is so big. I don’t need anyone to bring me down.”

Next post 5 tips for tackling a home improvement project