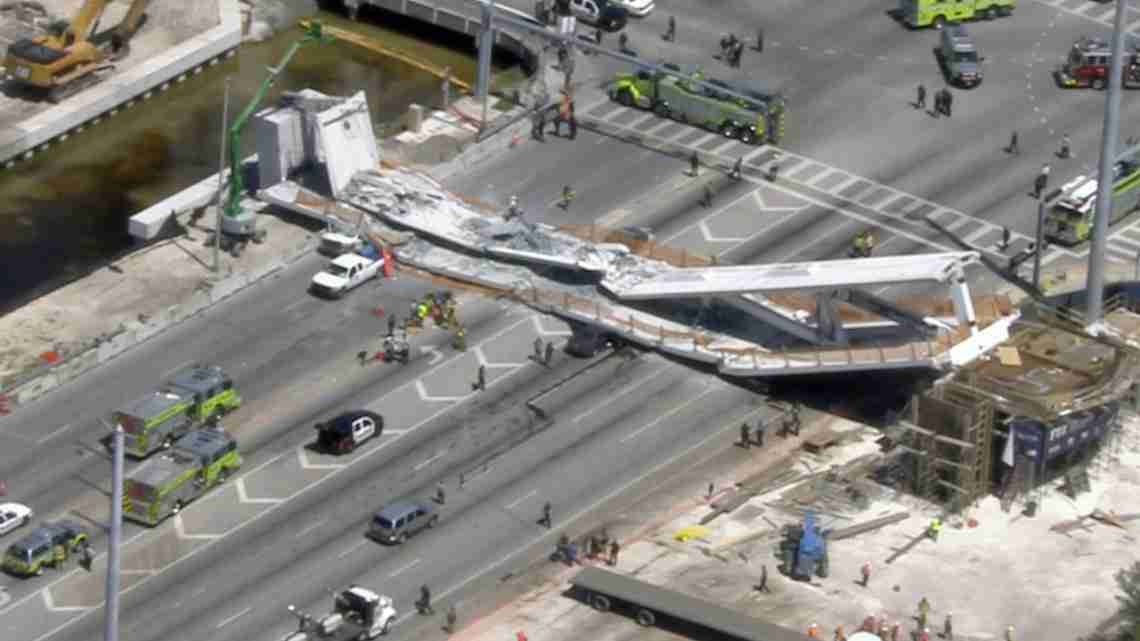 The FIU footbridge was meant to save lives. Instead, it left 6 dead.

MIAMI – At least six people are confirmed dead after the 950-ton pedestrian bridge collapsed over the Southwest Eight Street. The bridge was constructed at a cost of $19.4 million to provide greater safety for students who had to cross an eight-lane highway to attend classes at the university.

Construction crews put the structure in place only five days before its collapse. So far, first responders were able to take ten survivors to the local hospital; two are in critical condition.

The intersection is still closed as recovery efforts have been delayed by the possibilities that more of the structure could fall.

Figg Bridge Engineers, the designer of the project, was aware there were cracks on the northern end of the bridge before its collapse. W. Denney Pate, senior engineer for the bridge specialist firm, left a voice mail message with the Florida Department of Transportation (FDOT) stating that some cracks were found in the bridge but they did not pose a safety threat.

“Obviously the cracking is not good,” said Pate on the voicemail message. “At some point that’s going to get to your desk… call me back when you can.”

The FDOT did not get the message until the day after the collapse (Friday) and immediately released the recording to investigators, according to Heavy.com.

Some speculate the disaster could have been avoided if Pate had been more proactive and aggressive in reporting the flaws. The FDOT reported that one of its representatives met with the engineering firm and was “not notified of any life-safety issues” at the meeting, reported Reuters.

Tallahassee-based Figg Bridge Group was the design specialist of a 90-ton section of a bridge which fell apart during construction in Virginia. Four workers were injured in the incident and the company was fined $28,000 for safety violations.

The Miami-based construction company which partnered on the bridge project with Figg also has a history of safety violations. Munilla Construction Management, or MCM, has deep business and political ties in South Florida and said it would fully cooperate with the ongoing investigation.

“Our thoughts are with the families and victims, said the company in a statement. “Safety has always been our number one priority. We are just heartbroken.”

MCM is being sued by a Transportation Security Administration (TSA) employee who was injured in the collapsed temporary bridge at a work-site at Fort Lauderdale-Hollywood International Airport.

The company has eleven Occupational Safety and Health Administration (OSHA) violations on record and has paid $50,000 in penalties to the agency. They have been cited for employees not being certified to handle concrete, according to a CNN news report.

“Making concrete is like cooking,” said Nakin Suksawang, Assistant Professor at the Lehman Center for Transportation Research in a youtube video entitled The Twenty Million Dollar Bridge of Doom.

Suksawang, who worked on the project, said the variations of concrete “makes it harder for engineers to come out with a formula that can precisely predict the behavior of it.”

Suksawang said sixteen sensors were put into each of the bridges six sections by graduate students from his school which he supervised. The sensors, which Suksawang compared to a heart pacemaker, were designed to monitor the shrinkage and expansion of the concrete and provide analysts with immediate information.

Investigators are also looking into whether a stress test or the tightening of cables on site was the cause of the bridge’s collapse. Miami-Dade Mayor Carlos Giménez said in a press conference that a stress test was being conducted just prior to the structure’s fall.

Meanwhile, lawsuits have been filed. With each case, the process of discovery will bring out the facts leading to the bridge’s collapse.

The 174-foot crosswalk was designed to allow Florida International University students to sit and chat or do homework on tables. The construction specifications called for the bridge to last 100 years and be able to withstand a Category 5 hurricane.