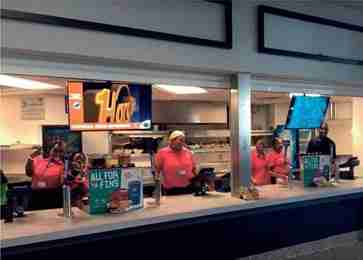 Oddly enough, the debut was at a Metallica concert, a world-renowned, American heavy metal rock band. Despite the audience’s main demographic not being Jackson’s usual partrons, the crowd was still lined up to taste the delicious soul food offerings available that evening.

Jackson’s concession stand stadium menu will vary and alternate from event to event.

So when heading out to the next Miami Dolphins or Miami Hurricanes game during football season, head to Level 100, Section 134 to enjoy a piece of soul food history at the new booth.

Jackson’s owner Sherlene Ingraham could not be more proud of how her brand has expanded over the last 30 years from the flagship location at 950 NW 3 Avenue in Historic Overtown, to their second location at 14511 NW 27 Avenue in Opa Locka and now it is a part of the electric atmosphere of the Hard Rock Stadium.

Ingraham is excited about the new opportunity and looks forward to creating more options for one of Miami’s oldest soul food restaurants.