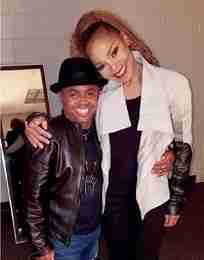 Jimmy Locust, who is director of the new conservatory Locust Dance Academy in Miramar and a dance teacher for the past 14 years, reconnected with Janet Jackson at the final performance of her State of the World Tour after many years. Jackson surprised Locust with VIP access to front and center seats and an invitation backstage at the concert in Atlanta on Dec. 17.

Locust was a featured dancer in the film for Jackson’s 1989 breakthrough album, “Rhythm Nation,” which also included the hit single “Miss You Much.” The video for “Miss You Much” opens with playful banter between Locust and Jackson and follows with a trio of dancers, including Locust, performing with Jackson.