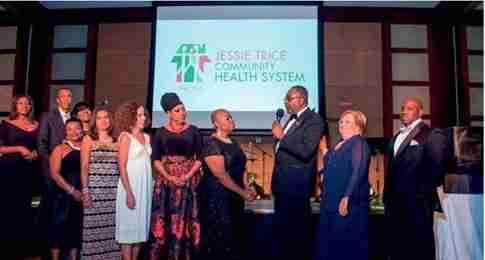 Sherwood DuBose, chairman of Jessie Trice’s board, speaks to CEO Annie Neasman, center, as they unveiled the center’s new name and logo during its 50th Anniversary Gala.

MIAMI – Fifty years is a long time to serve a community, specifically one that is among the most underserved and disadvantaged. But that is exactly what the Jessie Trice Community Health Center has done.

For half a century, the beloved healthcare provider has been committed to improving the welfare of residents in South Florida communities that otherwise wouldn’t have access. Recently, the center announced a befitting name change during its 50th Anniversary Gala to mark the occasion.

During the celebration, the organization announced that it has officially changed its corporate name to Jessie Trice Community Health System.

“For five decades the Jessie Trice Community Health Center has been committed to ensuring that residents of our community have access to quality, yet affordable healthcare,” said President and CEO, Annie Neasman. “The new name change reflects our growth as a health organization and our ongoing commitment to providing a wide-range of health services to the South Florida community.”

Highlights of the 50th Anniversary Gala included an awards presentation, musical performances and a special reveal of the health center’s name change and logo.

The gala was generously sponsored by an array of individuals, businesses and organizations.

Serving Miami-Dade County since 1967, The Jessie Trice Community Health System, Inc. has been a community mainstay that owns and/or operates 54 facilities, which includes 11 Comprehensive Primary Care centers, including a women’s substance use residential program, 40 school-based locations and two university centers.

JTCHS’ multicultural, multilingual and multidisciplinary staff serves a diverse population of over 47,000 patients who make more than 187,000 visits annually.

According to representatives from to the center, “We know how to satisfy our patients and have been doing so for decades.”