Johnson & Wales ranked number one in South for diversity by WSJ 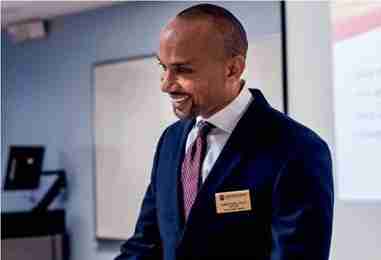 Recently, the North Miami Campus of Johnson & Wales University (JWU) was ranked number one for diversity in the school environment by The Wall Street Journal/Times Higher Education College Rankings. The Journal published the list of Top Colleges in the South for Diversity, which also ranked JWU’s North Miami Campus at number three nationally for diversity overall.

This distinction is in alignment with JWU North Miami’s enrollment, global reach and financial aid data.

Dr. Larry Rice, the president of JWU’s North Miami campus, said he was excited and proud to earn the distinction because it is an affirmation of the hard work his faculty and staff have done to create an academic culture that embraces diversity.

“Our focus here in N. Miami for the longest has been seeking to create an inclusive community on campus … regardless of cultural and ethnic background and even beyond that. We always embrace the notion of people understanding culturally different people,” Rice said.

The campus’ diversity is further reflected in the cultural background of its 1,561 students from 39 countries and 43 states and territories. The top five international student populations represent the Bahamas, People’s Republic of China, Argentina, St. Maarten, and Trinidad and Tobago.

Due to the many ethnicities and cultures represented, Rice said it is a priority at the campus to have faculty and staff students can relate to, not only in terms of culture, but in terms of how they think. “The richness of diversity comes with the responsibility of making sure that we hire in like manner,“ Rice said. “Our campus is thriving in terms of the diversity of our faculty and staff as well, which mirrors the student population. It’s not enough to just have people that look different, we also need to be diverse regarding decision making, interaction, sensitivities and more.”

Rice said there are certain practices the university has implemented to foster diversity. He cites their methods of educating, hiring and recruiting as lending to their success at attaining a diverse university culture.

“Our recruiting practices allow us to provide opportunities for students regardless of personal background, ethnicity and race. We have our admission standards, but we look at the whole person,” Rice said.

A part of looking at the whole person includes making sure college is affordable to first generation college students from low-in- come backgrounds.

This is evidenced by the fact that more than 97 percent of the campus’ students receive institutional scholarships and/or grants from the university, which awarded more than $23 million in scholarships for the current academic year.

Rice also said they have frequent strategic, intentional and purposeful programming on campus to address how two cultures can meet at a harmonious level as opposed to a conflicting one.

That programming includes: workshops and events; symposiums on topics like issues that impact the LGBT community; an annual Stereotype Awareness Week dedicated to exposing misinformation that Rice said inundates various media; a Talent Advancement Program designed to help students create greater success in college and in life; and the 1G program, which engages first generation students in experiences to help them acclimate to college life.

Rice said all of these things – combined with a commitment to check personal bias, and the thought that if people look the same they act the same, at the door – have helped them become leaders in diversity.

“Our personal bias is truly the thorn in diversity training. When we bring that in, that’s when things get clouded,” Rice said. “We deal with some of the hard hitting current issues that folks try to avoid that people are often uncomfortable with. We’ll talk about race relations; we’ll talk about cross-cultural conflicts even in South Florida. We just embrace those conversations.”

Despite their recent recognition, Rice said there is still much more work to be done to ensure JWU fulfills its diversity goals.

“We’re just beginning. We aren’t going to rest on our laurels. There’s always more to be done so while we certainly celebrate, acknowledge and accept it, we do believe we are miles behind and there’s so much that can be done,” Rice said. “There is an opportunity to continue developing the cultural intelligence of our staff and faculty. I don’t think there will ever be a day when we can say that there’s not more to be learned. The whole notion of education continues and it’s not temporal.”