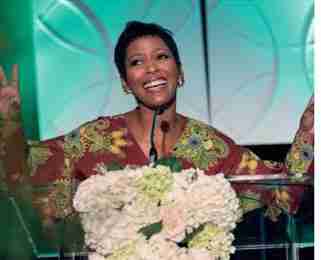 PALM BEACH GARDENS, Fla. – Tamron Hall, the vivacious, Emmy award-winning journalist and former NBC “Today Show” co- host, is clearly living life on her own terms. Recently, she told the packed audience at the PGA National Resort in Palm Beach Gardens that there is no need to feel bad about her departure from the high-profile gig at NBC, where she became the first black woman to co-anchor the “Today Show” in the network’s history. Hall has apparently moved on and is not looking back.

Hall was the guest speaker for the West Palm Beach chapter of the Links, Incorporated’s 37th Annual White Rose Luncheon held at the PGA Resort on December 2. Her exit from NBC was deemed controversial because sources say she felt she was demoted after being bumped from the highly visible 9 a.m. time slot to make way for Megyn Kelly, the white news host who was hired after leaving Fox News amid sexual misconduct allegations. NBC gave Kelly a 9 a.m. talk show, booting Hall from her 9 a.m. co-host slot. Even the National Association for Black Journalists organization went to bat for Hall in the wake of the controversial move; but Hall decided to leave the network instead of playing second fiddle to Kelly, who left Fox News Channel after allegations she was sexually harassed by Fox News Chief, Roger Ailes.

NBC brass said they were disappointed that Hall opted to leave the company, although it was stated she was informed when she was hired for the post that the 9 a.m. slot was not etched in stone.

Hall neither confirmed nor denied this at the luncheon.

Nonetheless, Hall says she has no desire to go back. ‘I don’t want to go back; I want to look forward!” she said, comparing it to a relationship that you left and have no desire to return to.

Hall hinted there may be a book coming and it seems she has a lot to say.

She told the well-heeled crowd that she is unapologetically pro black and she makes no qualms about it.

“When you are unapologetically black it doesn’t mean you have to diminish your light,” said Hall.

“We have to make them (other ethnic groups) hear our voices. When our (black) children are killed, they (other ethnicities) need to show up with us! I want to stand with my white sisters when they are sexually harassed, but I need them to stand with me for our causes too!”

Hall said the black woman is undeniably special. “The power of black femininity is a lesson for the world. What we have running through our veins – it can’t be duplicated. I call it the blessing of God.”

Hall said she refuses to cower down to those who are threatened by her or other blacks. “I’m as passionate about us having a seat at every table. When we’re in the room, we elevate the room. If they’re threatened by us – so be it. They often want us to dim our light, just so they can shine,” she said bluntly.

Hall, who is petite in stature, speaks with strength and power, which she said comes from her humble beginnings and her upbringing. “My mom is unapologetically pro black. After my birth, I was brought home to a shotgun shack in Texas. That humble place allowed me to be who I am today,” she stated.

The crowd gave Hall a standing ovation in the wake of her speech. Afterwards she graciously took pictures with audience members.

Co-chair of the event, Delores Oliver Calloway, said the speaker was forthright and dynamic. “Our speaker was very forthright and transparent about her status in the media. Additionally, she was very open, honest and seemed to relate well to the audience.”

Calloway also said the banquet was excellent and those who attended seem to echo that sentiment. “Everyone seemed to enjoy themselves and felt that the speaker really spoke to the audience and noted they could certainly relate to her,” Calloway said.

Each year the Links’ West Palm Beach Chapter holds their White Rose Luncheon the first Saturday in December and usually sell out due to their outstanding service and dynamic speakers. The room was filled with dignitaries and noted individuals, among many other well-wishers who support the group each year. Hall, quipped that the audience was so well put together that she wanted to adopt them as her family!

The chapter gives out thousands of dollars in scholarships during the Spring.

Previous post What now America, your values are askew?