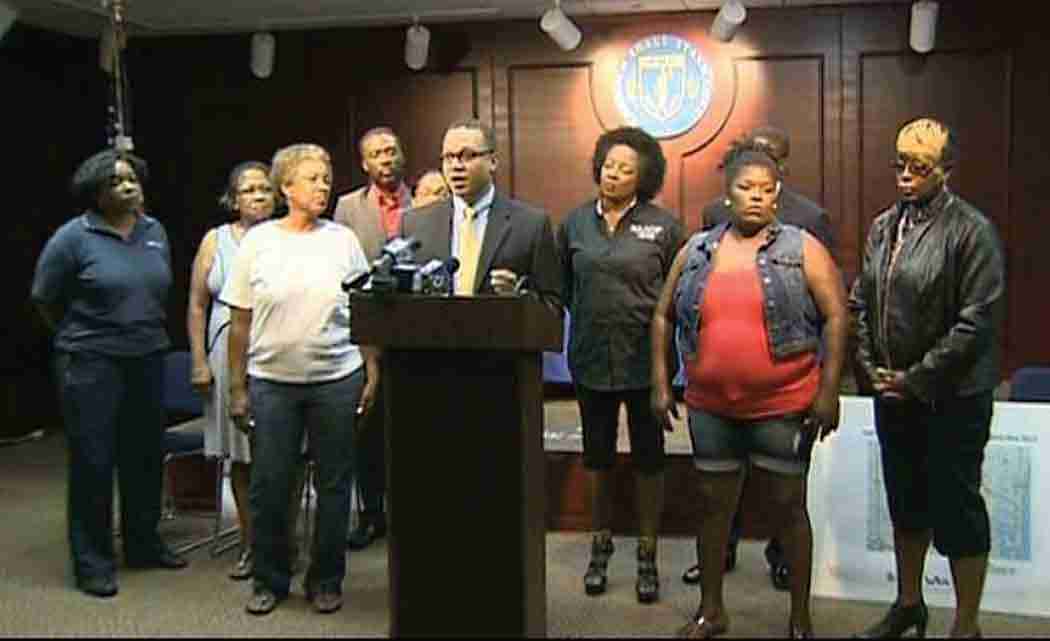 And now it’s several city of Fort Lauderdale police officers that are  in the spotlight for racial misconduct. The NAACP local preaident Marsha Ellison and Gordon Weekes the Chief Assistant Public Defender are asking for the Department of Justice to investigate the Fort Lauderdale Police Department, maintaining there is widespread and rampant racism throughout the operation. This, in the wake of four white and Hispanic officers who displayed blatant racism in personal text messages and the making of a video. Three of the officers were recently fired, and one resigned during the investigation.  But the Public Defender, Howard Finkelstein, says there’s more to it than the actions of these four officers. He says he asked the Justice Department to look into the Fort Lauderdale Police Department last August – before this issue came to light – concerning “egregious discriminatory and race-based police practices.”  At the time of that complaint, Finkelstein said nothing happened.

The video, which was made by Officer Alex Avarez, 22, depicted President Barack Obama with gold teeth and a gold chain around his neck. It also showed KKK images as well as a black man being bitten by a dog and black men staring down the barrel of a gun. The other three officers, James Wells, 30,  Jason Holding, 31, and Christopher Sousa, 25,  joined Alvarez in sharing racist personal text messages where one of them mentioned ‘killing niggers.’ They repeatedly used the “n” word in numerous pages of the text messages. The text messages and video came to light when Alvarez’s ex-fiancée, 22 year old Priscilla Perez, sent them and a complaint to their boss,  Fort Lauderdale Police Chief Frank Adderley. Perez reportedly said Alvarez’s racist views affected every aspect of his life, including his work patrolling a predominantly black neighborhood. A five-month investigation ensued, and the officers were recently fired, while Alvarez resigned in January during the internal investigation.

Perez reportedly also stated that her former fiancée was so racist that he wouldn’t go see the movie “Annie” with her, because it starred black actor Jamie Foxx.

Finkelstein is also looking into whether these officers had any sketchy encounters with black males, where they either called them names or assaulted them. Finkelstein is reviewing all 52 cases that are still open that involve any of the four officers, as well as all 126 closed cases involving the four men – dating back two years. Finkelstein has said the problem goes much deeper than the four officers involved in this case. In his letter to the Justice Department, he stated he does not believe the Fort Lauderdale Police Department conducted a full investigation, so as to protect the department. Numerous other alleged victims of racism at the hands of the Fort Lauderdale PD have come forth, bombarding an NAACP hotline, expressing their situations and concerns.

Marsha Ellison, president of the Fort Lauderdale/Broward Branch of the NAACP also says there is widespread racism throughout the department. “These four officers … this is not even the tip of the iceberg,” said Ellison, who was recently flanked in a news conference by two mothers who said their teenagers were the victims at the hands of Fort Lauderdale police. “We believe there’s plenty more where that came from,” said Ellison.

But as is apparent on the evening news, Fort Lauderdale isn’t the only city experiencing blatant racism among some of its officers. We’ve seen the high profile cases of Trayvon Martin in Central Florida, and Michael Brown in Ferguson, Missouri, and other cases over the past few years.

It was mere weeks ago that the nation recognized the 50th anniversary of “Bloody Sunday,” when hordes of blacks tried to march from Selma to Montgomery, Alabama hoping to call attention to their right to vote. But they didn’t make it across the Edmund Pettis Bridge, for they were savagely beaten by sworn officers with Billy clubs and police dogs and halted in their tracks.

Have things really changed?  The encounters may not be as big as “Bloody Sunday,” but nonetheless, black males have lost their lives at the hands of white police officers. And clearly, when you talk to black males about their relationship with officers, particularly white officers, there’s outright distrust.

But Fort Lauderdale Police Chief Adderley, who is black, was coy when asked about this distrust. Instead of addressing the issue of distrust between black males and white officers, he posed a question to this reporter. “Is that your opinion?” he asked. “No,” I said. “It appears to be the opinion of black men everywhere – that there is distrust among black males when it comes to white officers,” I responded. “You don’t think that distrust exists?” I asked.“Perhaps I’m not the one to ask that question,” he responded.

Clarence Williams III, police chief of predominantly black Riviera Beach, said clearly there’s some distrust between the police and segments of the community. Williams didn’t respond to the Fort Lauderdale case, but said in a previous interview that distrust certainly existed in Ferguson, Missouri. “This is an excellent opportunity for our industry to learn from,” he said of the situation in Ferguson.  “We learned that it’s important to have relationships with their community. We can’t have this kind of distrust,” he said. “When we have so much distrust, we, as police executives, have to pay attention to that. As chief executive officers, we have to reassure the community that we are there for them, and that we’ll keep them informed.”

In the case of Chief Adderley, he says he would welcome an investigation by the Justice Department. “It’s a good way of being transparent,” he said in an interview. “You have a lot of departments (police departments) that are resisting this sort of thing. In our case, we’re fortunate we have an engaged community that’s speaking out,” he added.

Ellison said the NAACP phone lines have been bombarded with such complaints. But Adderley said he knew nothing of these situations that are currently being reported. “We have no internal investigations of them,” he said.

Adderly was asked how did these officers slip through the cracks with such obvious racist views? He responded sometimes they slip through. “They took the test, which was designed to eliminate people who feel that way. But no one comes in and says,  ‘I’m a racist and I hate black people,’” Adderley stated. “In this case, they got through,” from this point on, they’ll take a closer look at the hiring process. We can evaluate them better. Everything has room for improvement.”